This is the week that thirsty fans of the toothy funster have been waiting for since the IPC/Kellogg's free milkshake promotion was announced in the 21 April 1979 issue. Cheeky Weekly is the fourth and penultimate participating title to give away a sachet of drink mix. I evidently consumed said drink and didn't keep the empty packet, and other than this page, there doesn't seem to be any online resource offering more information about this particular brand of milk flavouring.

As has been the case with the other titles that carried free milkshakes, this gift-bearing issue of Cheeky Weekly coincides with the launch of a multi-part cut-out feature designed to retain any kids lured into buying this edition just to bag the freebie. Each title featured a Spotter Book on a different topic, and the subject of Cheeky Weekly's Spotter Book is the rather vague 'Town and Around'. This is the second such book to appear in the comic - the first was the Cheeky Spotter Book of Fun.

Considering the prominent dairy element of this front page, one might have expected Milkie to join the toothy funster for the cover gag, but the mirthful milk-deliverer is in fact absent from the entire issue, leaving our grinning pal to commence this week's frivolities with Baker's Boy.

6 Million Dollar Gran's story is reduced to 2 pages this week, and one might assume that this truncation is due to the presence of the Spotter Book if it wasn't for the appearance of a Tease Break filler where the third page of Gran's tale would normally be.

On page 8 is a rather unusual ad which requires the reader to do some work to discover the name of the advertiser.

This week's Star Guest spot features the paternal reminiscences of Dads As Lads from Whoopee!

On Wednesday Cheeky receives a smutty issue of the Mystery Comic (but only because Zoot Soot the chimney sweep is the donor). Having blown the ashy deposits off the perplexing publication, Cheeky enjoys a Tub episode featuring a cameo appearance by another of the Mystery Comic's stars.


Normal Mystery Comic proceedings are interrupted by the presence of the Spotter Book on its centre pages and the comic-within-a-comic rounds off with an enjoyably daft Disaster Des episode. Love the Sploik and Blat, both of which are surprisingly devoid of exclamation marks.


Elephant on the Run and Why, Dad, Why? are absent this week due to the pressure on space resulting from the Spotter Book and an ad for Trebor Chews. Elephant and his plastic-clad pursuer can be seen in this week's Whoopee! where they're making a Star Guest appearance.

Returning to the Cheeky section of the comic, there's evidence of some alteration to the artwork on the Thursday page as the final panel is drawn by Jimmy Hansen (his first work on a Cheeky's Week page) whereas the rest of the page is by Frank McDiarmid. Jimmy's panel serves as an intro to a half page teaser for something coming next week (possibly the original panel contained an intro to Skateboard Squad whose final episode appeared last week).

On the Chit-Chat page, reader Richard Leahy raises a question that many Friends of Cheeky will have pondered at one time or another... 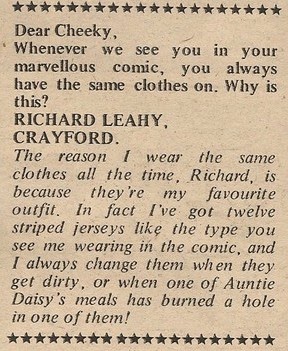 Also on the Chit-Chat page is a correction to the knitting pattern printed in the 31 March issue.

After Cheeky's visit to the Vicar's Jumble Sale on Saturday, the comic concludes with another Burpo Special, this time focusing on Doodle Doug.

Artwork duties on the Cheeky's Week pages this issue are shared by Frank McDiarmid and Jimmy Hansen who contribute 10 and 2 elements (or parts thereof in the case of the main Thursday page) respectively.