The next raid to involve Mustapha Million occurred in Whizzer and Chips dated 23 April 1988, and saw him again as victim to an incursion. Can you locate the impudent intruder? Scroll down to see the rotten raider revealed. 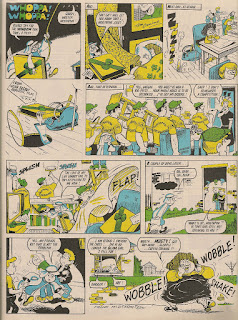 Yes, once again it's the troublesome trickster, Joker. The bequiffed buffoon was the target of Mustapha's raid into Whizzer territory in the 20 February 1988 edition. Just to be extra annoying, Joker is using that oft-repeated and infuriating phrase to announce his raid when he knows I don't like it. Grrr!

Mustapha's confectionary conveying escapade was inspired by the Cadbury's Milk Tray TV ads, although I think the Mustapha scriptwriter may have confused brands and been thinking of Black Magic chocolates. The long-running series of Milk Tray ads featured a James Bond-like character undertaking highly perilous missions to deliver a box of said sugary comestibles to an unseen recipient, placing his enigmatic calling-card alongside the chocs on a bedside table before withdrawing into the night.


It's hard to see the similarity between Fatima (for whom our middle eastern mate has clearly been carrying a torch since leaving his homeland) and Mustapha's new inamorata, but the ways of love are indeed mysterious. Personally, I think anyone who calls him Musty is to be avoided.