The Whoopee! Years - Cheeky in Sweeny Toddler, and the Tom Paterson Question

In Whoopee! and Cheeky dated 28 February 1981, in addition to his regular (at that time) 4-pages-per-week 'Cheeky' strip, the grinning gagster also made a cameo appearance, alongside a cake-carrying Krazy Town crony, in that week's Sweeny Toddler episode.

If I may take us back for a moment to our toothy pal's own comic (this is relevant to the strip above, so please bear with me), as we know, even the mighty Frank McDiarmid wasn't able to generate all the Cheeky pages in every issue of Cheeky Weekly. I was aware when reading Cheeky Weekly as it was being published that other artists stood in for Frank on occasion. Frank was asked about this when he was interviewed by Paul Squires for Crikey! magazine in 2009, and Frank said that he drew two thirds of the Cheeky strips in that title, a statement that I was delighted to prove correct when I did an analysis of all the Cheeky's Week artwork in 2010.

I've long had a suspicion that Tom Paterson was among the artists who were on occasion drafted in to deputise for Frank during the Cheeky Weekly years. For a period before I started writing this blog I was a regular poster on the Comics UK forum. I raised the issue of the stand-in artists on the forum, and when I proposed there that Tom was responsible for some of the Cheeky artwork, nobody who responded agreed with me, but a couple of people made the suggestion that Frank's pencils may have been inked by other artists, something which I had not considered at all up to that point (some deputising artists, such as Mike Lacey, Barrie Appleby and Dick Millington were clearly pencilling and inking their own pages). My 2010 analysis proves that some of the artwork did indeed use the  'Frank's pencils inked by another artist' method.

However I still have a feeling that Tom did have a hand in some of the artwork during the toothy funster's heyday. His work above gives us an opportunity to compare his rendition of the toothy funster with those on the page below which is from Cheeky Weekly dated 24 June 1978. 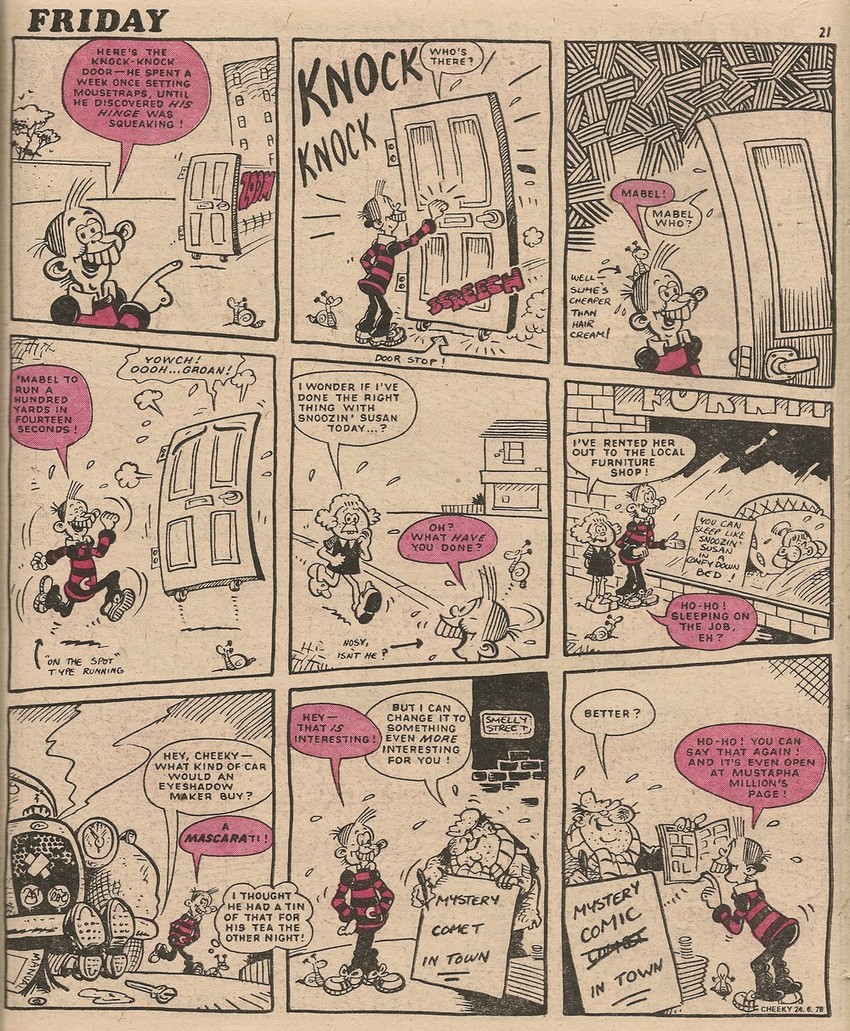 To me, not only does the style of Cheeky's appearance look very similar, the lettering on the sound effects and notes written directly onto the panel (i.e. not in the speech bubbles) matches very closely. Interesting.
Posted by Niblet at 08:31