After falling victim to a raid in Whizzer and Chips dated 23 April 1988, our middle eastern mate wasn't involved in a cross-comic incursion as either victim or perpetrator until the following June. However, before I examine that next Mustapha-related raid, I shall respectfully direct you here to read about a historic conciliatory interlude in the long running antagonistic relationship between Whizz-kids and Chip-ites, which occurred in the 28 May 1988 edition. I wanted to mention that occasion here so that it's referenced in the correct chronological sequence in this series of posts, as I believe it has relevance to subsequent developments in the history of Whizzer and Chips raids. But more on that in future posts.

Whizzer and Chips dated 11 June 1988 - Mustapha is once again unwitting host to a weaselly Whizz-kid. Can you spot who has slipped into his strip this week? Scroll down to see the raider reveal themself. 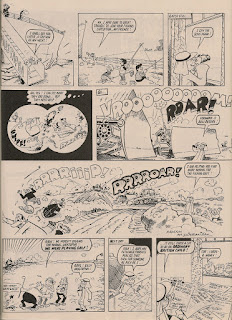 Yes, it's the head Whizz-kid Sid's sneaky serpent sidekick, Slippy. AND he's using that hackneyed phrase again. At least he's only thinking it, rather than speaking it but it's still ruddy annoying.