A Victory For Team Cheeky!

The readership of Whoopee and Wow! in early 1984 probably included a large proportion who weren't even aware that 6 of the strips they were enjoying each week had transferred into their comic from the defunct title Cheeky Weekly in February 1980. However, most readers of the time would have known that Whoopee! had assimilated some strips from another failed comic, Wow!, because that title had been getting second billing on the cover since July 1983. The aforementioned 6 refugee features from the toothy funster's comic had all survived the Wow! merger, though Cheeky's strip had been reduced to single row of panels and 6 Million Dollar Gran had undergone a major refashioning to become the lead character in a strip called Gran's Gang. Nevertheless the fact that all the Cheeky strips which transferred to Whoopee! had managed, in one form or another, to withstand the vicissitudes of the contracting British comics industry for a period of 4 years after Cheeky Weekly's demise (at the time to which I'm referring - some Cheeky Weekly characters would survive considerably longer) is rather remarkable. Not only that, but a new strip based on Calculator Kid, entitled Calculator Corner, had been introduced after the Cheeky Weekly merger, and was still appearing as 1984 commenced. 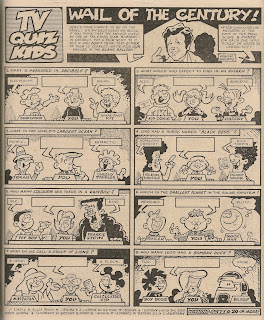 TV Quiz Kids was one of the highlights of Whoopee and Wow! at this time. Devised and drawn by the ever-inventive J Edward Oliver, the strip affectionately spoofed a different TV quiz show each week. The page above took as its inspiration Anglia TV's Sale of the Century, the self-styled 'quiz of the week' from Norwich, presented at the time by Nicholas Parsons.

16 comic characters from the Whoopee and Wow! crew of the time were depicted as quiz contestants, 5 of whom were Cheeky Weekly survivors. Stage School was the only ex-Cheeky Weekly strip not to be represented on the page, despite at this point having the honour of appearing on pages 2 and 3 of Whoopee and Wow! each week. Stage School's absence from Wail of the Century may have been because it was an ensemble piece and therefore had no real lead character to represent it.

Somewhat surprisingly, bumbling blockhead Paddywack provides the correct answer to his question. It's less surprising that Gran gets her question right as she has a computer brain (despite her robotic nature no longer being apparent in Whoopee and Wow! by this stage).


Fluffing their questions and letting the Cheeky side down are the toothy funster himself, Mustapha Million and, in another shock, Calculator Kid who evidently wasn't allowed to confer with his silicon-chipped sidekick.

Of the 11 remaining regular characters, only 2 have the correct answer, so I make that a win for team Cheeky whose members had a success rate of 40% with their answers, whereas the combined brainpower of characters originating in Whoopee and/or Wow!, despite their greater numbers, can only achieve a paltry 18.18% correct responses. I know they're severely hampered by having Frankie Stein on their team, but shame on you, Bookworm and Bleep.

Another J Edward Oliver version of Cheeky can be seen here.