The Cheeky's Week...Sunday cover strip contains 2 gags this week – the top row of panels concern the latest of Auntie Daisy's culinary catastrophes, while the bottom panel displays the full horror of a dairy delivery disaster resulting from the ill-advised collaboration between Milkie and Bump-Bump Bernie.


After an encounter with Ursula on Wednesday, Cheeky is alerted to the imminent arrival of this week's copy of the Mystery Comic by mirthful mailman Postie.

Tub's story is a bit odd this week – our portly pal is perplexed as his glider has landed 'out of reach', yet it's only lodged on a window ledge. Tub is not the most athletic of kids, so surely a quick walk up the stairs would involve less exertion than trampolining or clambering up the rain pipe. 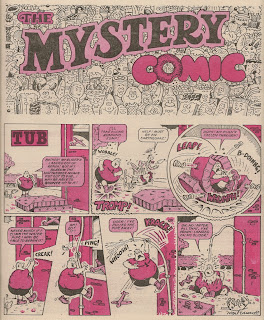 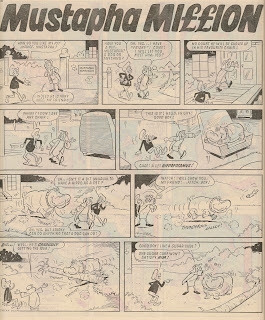 Bumped from the Mystery Comic this week is Disaster Des, whose absence is due to disruption resulting from the 2 pages given over to listing all 800 lucky winners of the Saint competition which ran in the 02 December 1978 issue plus a further half page of Smurf competition winners from 09 December 1978, not to mention a full-page ad heralding the first issue of IPC's new comic, Tornado.

On page 29 is news of a somewhat unusual feature next week – it's a knitting pattern for Cheeky's jersey.

Our toothy pal 'enjoys' a spot of fishing on Saturday, before the comic rounds off in the traditional way with a Pin-Up Pal poster, this week featuring that sporran-sporting skinflint, Uncle Hamish, fleeing in terror from Do-Good Dora's collecting tin.

Frank McDiarmid provides all 9 Cheeky's Week elements in this issue, together with the back cover poster. This is the final time that Frank's work will grace a Pin-Up Pal poster. The feature will come to an end next week, with a Skateboard Squad poster by Jimmy Hansen.