School dinners have been a source of playground humour since the first caveman herded a group of junior troglodytes into a cavern to teach them how to draw on the walls, and his wife slapped a pile of mastodon fritters in front of them at lunchtime.  Cheeky Weekly's creators probably thought a school dinner lady would be a popular addition to the roster of Cheeky's pals, as readers would be keen to adapt school dinner jokes and apply them to their own school canteen staff.

It would seem that Auntie Daisy the school meals lady was indeed a hit with readers, as she was absent from only 11 issues of Cheeky Weekly after her debut in the 19 November 1977 comic.  The disastrous dinner lady had been appearing regularly in the 'Ello, it's Cheeky strip in Krazy since the 12 February 1977 issue of that comic.  She continued to appear there, while also appearing in Cheeky Weekly, until Krazy's demise.  In total Daisy appeared in 102 issues of Cheeky Weekly.

Cheeky's encounters with Daisy generally occurred over 3 panels.  In the first panel, Cheeky would make some disparaging remarks about her culinary skills.  Daisy would attempt to restore her tarnished reputation with a counterclaim in the second panel, and in the final frame of the sequence, the toothy funster would unleash his devastating riposte, revealing the true horror of Daisy's recipes.

When Cheeky delivered Daisy's newspaper on Sundays, smoke would often be seen wafting from her front door.

Daisy was one of the guests at Cheeky's new year party in the 07 January 1978 comic.  Nosy Norah and Libby were aghast later in the same issue when Cheeky told them that he was going to Auntie Daisy's house for a snack.  However the real reason for the toothy funster's visit was to pick up a copy of The Mystery Comic, which Daisy had concealed in her recipe book.

It was Daisy's turn to step into the spotlight and feature throughout Cheeky's Week (apart from Tuesday) in the comic dated 22 April 1978.  On Sunday a worried-looking Cheeky learned that she would be preparing a special dish for him, and during the week our toothy pal's anxiety grew as he observed Daisy gathering various unappetising ingredients.

The clueless culinarian featured on the cover of 04 February 1978's skateboard issue, as she sped past Cheeky on her home-baked skateboard, plucking her copy of The Sunday Sausage-Burner from the toothy funster's paper delivery bag as she went.  The shocking chef was back on the cover for the 25 March 1978 issue, observing a school dinner gag from our toothy pal.  There were school canteen capers featuring the ruinous recipe wrangler on the cover of the 01 July 1978 issue, and on the front of the comic dated 26 August 1978 Daisy's brief role in keeping the army marching on its stomach is revealed.  Daisy was again on the cover, this time as a member of the Joke-Box Jury judges, on 09 September 1978.

Daisy was again among the invitees to Cheeky's new year party in the issue dated 13 January 1979.

In the comic dated 10 February 1979, it was revealed that the notorious nosh nobbler was among that elite band of Cheeky's pals who had been awarded the iron cross (Herman and Ursula being the other two).

There was an inauspicious start to the party held by Daisy for Cheeky and his pals in the 12 May 1979 issue, as the toothy funster passed a delivery man carrying boxes of indigestion tablets to the dinner demolisher's front door.  Even Crunching Chris couldn't get a sound out of Daisy's soggy biscuits.

Daisy threw her kitchen open to the public in the comic dated 18 August 1979, and this time it was her crisps that Chris (who obviously hadn't learned his lesson 3 months earlier) couldn't crunch.

A primitive form of life appears to be evolving from the roiling contents of Daisy's saucepan in the Pin-Up Pal poster which appeared in the 01 April 1978 comic, and the calamitous cook was the subject of 10 February 1979's Burpo Special. 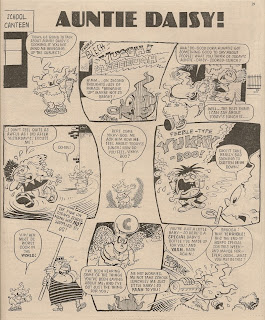 We can only speculate as to the significance of the C on Daisy's hat - cook? chef? Something less than complimentary?  Who knows?