Sonny Storm was the fourth feature to represent the adventure film component of Cheeky's Saturday morning trip to the cinema.  Previous strips in that location had been;
However, unlike those serials Sonny Storm made a single appearance, in the 23 September 1978 issue.  The adventure film took a break the following week, as the comic underwent something of an overhaul, but returned in the 07 October 1978 issue, this time in the form of the first episode of the serial, The Terrible Trail to Taggart's Treasure.

According to this page, Sonny Storm originated in Knockout comic, and I'm assuming this refers to IPC's Knockout, published from 1971 to 1973, and not the earlier comic of the same name published by Amalgamated Press from 1939 to 1963.  Certainly the green spot-colour on display in the sample frames shown on that site suggest that they originate from IPC's Knockout, which boasted on its cover, rather fraudulently in my opinion, that it was an 'All-Colour Comic', when most of the pages were spot-colour only.

UPDATE 14 January 2012 - Many thanks to philcom55 and Raven from the Comics UK forum for telling me that Sonny Storm actually originated in Cor!! (Sonny's first appearance was in the 25 September 1971 issue).  Sonny's only connection with IPC's Knockout would appear to be that he appeared in some of the annuals. 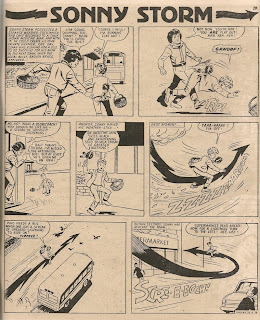 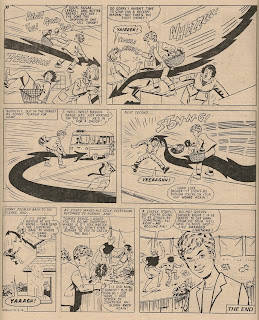 The Sonny Storm strip used in Cheeky Weekly was presumably a reprint, and there's certainly evidence of panel resizing.  Interestingly, two approaches to resizing seem to have been employed.  On the first page, an attempt has been made to conceal the resizing, as most panels appear to have been expanded, some at both left- and right-hand sides.  However, on the second page all the panels on the right of the page have been extended to the right, making the adjustments to the artwork rather obvious.

Update 17 October 2017 - Reading Irmantas' post on the original run of Sonny Storm in Cor!! leads me to suspect that the one-off adventure above was sourced from either a Cor!! Summer Special or Annual, which would explain the need for resizing of the artwork.