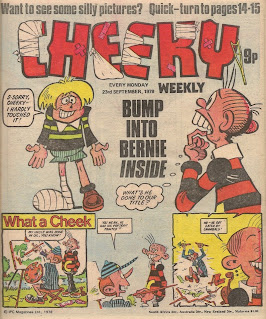 Bump-Bump Bernie shares the main cover pic with Cheeky this week, and there's a nice touch as the comic title displays signs of serious injury in honour of the guest cover star.  The Crack-A-Joke game, which reaches its fourth and final instalment inside, doesn't get a mention on the cover, while the Silly Snaps filler feature is promoted in the above-title banner.  Posh Claude is driven to artistic apoplexy in the What a Cheek strip.

The Skateboard Squad strip gets a bit of a makeover this week, as for the first time they have a proper title panel instead of the introductory caption, and for once our intrepid trio aren't on the trail of a felon - this week they're chasing their escaped pet mouse.

This week's 6 Million Dollar Gran tale, chronicling the synthetic senior citizen's ornithological encounter with a rare spotty-legged woodpecker, includes in the final panel the tag line of a gag set up in the closing frames of the Sunday evening page… 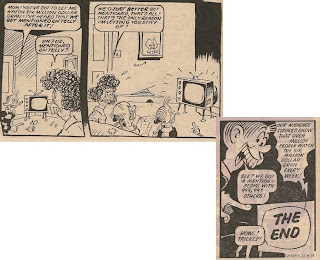 On Tuesday several bandaged limbs are in evidence as a consequence of the cycle crash between cover star Bump-Bump Bernie and Gloomy Glad.

As he arrives at Burpo's house for his babysitting session on Wednesday, Cheeky is dismayed to find that Burpo's cousins are back, and the toothy funster is expected to keep the horde of horrors amused with the Crack-A-Joke game.  Because the final instalment of the colour Crack-A-Joke feature this issue occupies only a single page, the Wednesday feature benefits from full colour. 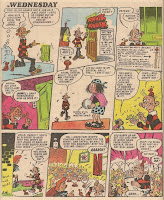 On Friday it is apparent that Cheeky and Snail are aware that they are characters in a comic, as the toothy funster makes reference to turning the page to see this week's Calculator Kid story, and Snail decides to take a shortcut in that direction (literally).  On the Calculator Kid page we see further evidence that Cheeky Weekly is sold in Cheeky's universe, as an ad for the comic can be seen on a bus.  This isn't the last time we'll see a reference to Cheeky Weekly in a Cheeky's Week page this issue. 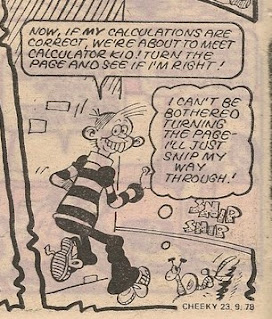 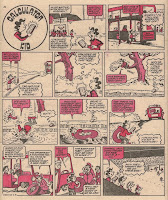 Tweety and Sylvester's strip is only a page and a half this issue, to allow an intriguing ad for next week's Cheeky Weekly. 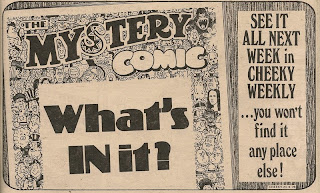 As the Archie's Angels film serial came to an end last week, there is a new adventure film during the cinema show on Saturday - it's Sonny Storm, actually a reprinted strip from IPC's Knockout Cor!! (thanks to philcom55 and Raven from the Comics UK forum for the correction).

Silly psychic Crystal Belle peers into her crystal ball to make assorted prognostications throughout Cheeky's Week in this issue.  In his final encounter with her this week, Cheeky makes reference to the cover price of Cheeky Weekly being 8p, when we know that as from last issue the cost of the comic went up to 9p.  Doh! 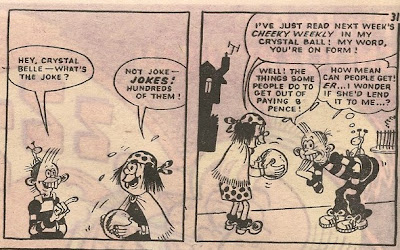 Snoozin' Susan brings this issue to a close with her somnolent sojourn on the back cover poster.

There are a number of departures this week, as the comic prepares for a revamp.  The following features come to and end;

What A Cheek
Sunday evening
Teacher's Teasers ends its brief run after only its third appearance.

The Crack-A-Joke cut-out game reaches its fourth and final instalment.

The Sonny Storm feature makes its one and only Cheeky Weekly appearance.

Burpo's Cousins make their final appearance, but there's a newcomer to Cheeky's week, in the paint-splattered shape of Krazy Town's painter and decorator, Willie Brushiton.