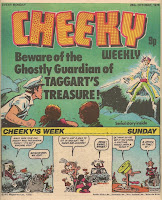 Brett Mason and his young nephew and niece confront their terrifying spectral nemesis in this issue's main cover pic, as The Terrible Trail to Taggart's Treasure is given a boost. The artwork used on the cover to promote the feature is based on a panel from the story inside. Meanwhile, Cheeky indulges in banter with Spiv and Manhole Man in the cover strip.

Nigel Edwards stands in for usual artist Ian Knox on the 6 Million Dollar Gran strip, for the second week running. This week Gran meets Uncle Hamish. No, not Cheeky's Uncle Hamish, this is Major Hamish McPotts from the Scots branch of the family. Gran replaces Hamish in the parade after she accidentally concusses him with the ceremonial baton.

The mighty Reg Parlett is back doing the artwork on Mustapha Million this week. Joe McCaffrey drew the strip in the last 3 issues.


The Paddywack strip is reduced to a single row of panels this week, as it was in the last issue.  Those readers who fancy their skills on spot the difference competitions will eagerly scan the remainder of the page on which Paddywack's strip appears; it contains lists of winners of the Skateboard and Tennis competitions, which appeared in the 17 June 1978 and 24 June 1978 issues respectively. Of course, not a little luck is also required to secure one of the prizes on offer, as winners are selected from the correct entries, although entrants in the skateboard competition were also required to contribute an amusing caption for the spot the difference pic.

On Saturday, the cinema commissionaire wishes every week could be an anniversary issue like last week's, when he didn't get trampled. In fact, he didn't appear at all in last week's issue. Could he be the person inside Presto's rabbit suit?

All the Cheeky's Week features this week are pure Frank McDiarmid art, and Frank's on top form.


Please note that Cheeky's Pal Puzzle, although shown above as a feature, was actually part of the Saturday feature, so is not counted as a separate Cheeky's Week element below.