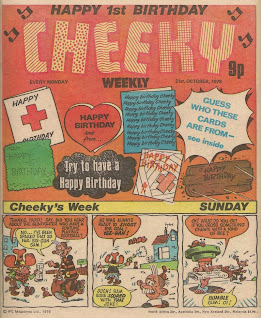 Cheeky Weekly commences its second year of publication with this first birthday issue. Not all comics survive to the end of their first year, so this is certainly something to celebrate. The main cover pic features birthday cards from a few of Cheeky's pals and we're invited to guess who sent them. Despite the cover's 'see inside' caption, the identity of the senders of the greetings isn't given in the comic. Can anyone name them all?

Rather surprisingly, no mention is made of the anniversary in this week's cover strip.


The writer of the Cheeky's Week script for this issue seems to have taken inspiration from the 1950 film Harvey, starring James Stewart; as during the week Cheeky has multiple encounters with a human-size rabbit that is apparently only visible to the toothy funster. 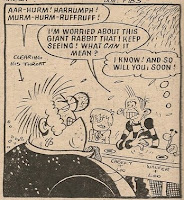 6 Million Dollar Gran is reduced to a 2-page episode in which the synthetic senior citizen strives to keep young Pete Potts out of danger as he sleepwalks around town. All comic readers know that one must never waken a somnambulist. This Gran episode is drawn by Nigel Edwards, the third time he has stood in for usual artist Ian Knox.

Inside The Mystery Comic, The Man In The Plastic Mac isn't fooled by our Elephant chum's deft disguise dodges and, like Gran, Mustapha Million's story is truncated by having one page less than normal. 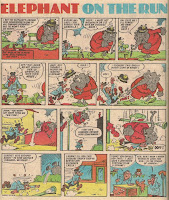 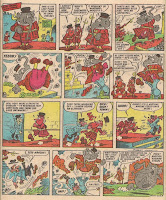 On page 22, back within the Cheeky Weekly section, our Calculator Kid pals are beset by that recurring problem for comic characters; the old meanie who won't give kids back their footballs. Needless to say, Calculator soon has the balls bouncing back to their rightful owners.

Space seems to be at a premium in this issue, as even our perplexing pal Paddywack is reduced to a single row of panels this week.

On Saturday a relieved Cheeky finds out that the giant rabbit he's been seeing all week wasn't the result of a mental aberration brought on by the strain of a year's worth of jokes and japes. It is in fact Presto The Magic Rabbit, who Cheeky's pals have hired for a special show at the cinema, to celebrate Cheeky Weekly's first birthday. Not only that, but Ursula the usherette is giving away all the goodies on her tray for free.

After this week's episode of the film serial, Presto returns on the back cover to set this week's Cheeky's Pal Puzzle, a rather too-brain-taxing word search.

All the Cheeky's Week features in this comic are drawn by by Frank McDiarmid pencils.

Presto The Magic Rabbit makes his only Cheeky Weekly appearance in this issue, and consequently this is the only issue to contain the Hey Presto! Magic Show feature, replacing the usual supporting feature pages.

The higher-than-usual number of adverts in this issue resulted in some features being truncated. While being frustrating for readers expecting their usual-sized helpings of 6 Million Dollar Gran, Mustapha Million and Padddywack, the increased advertising is possibly a sign of a reasonably healthy circulation, or else IPC was offering reduced rates for advertising in this title due to poor sales.