As Cheeky Weekly approached its first anniversary, three single-appearance (as far as the toothy funster's comic was concerned) filler features, sourced from earlier IPC/Fleetway titles, turned up in the comic's pages.  The first of these was Hickory Dickory Doc (Cheeky Weekly 16 September 1978), a reprint from Cor!! which, on its original appearance in that earlier comic, was one of a number of tryout strips vying for the votes of Cor!! readers (see Peter Gray's blog for more info).  As Hickory Dickory Doc didn't win, I'd guess that it didn't return to the pages of Cor!! so there was no prospect of any further instalments after its single outing in Cheeky Weekly.

The second one-off reprint came in the form of a single Sonny Storm tale (Cheeky Weekly 23 September 1978), plucked from the original run of Sonny Storm strips that also had appeared in Cor!!

At the time the third and final one-off reprint appeared in Cheeky Weekly, other reprints had appeared, some were still appearing, and more would be introduced in later issues but all, other than the three mentioned, appeared more than once.

For the final one-off reprint in the issue dated 14 October 1978, a feature punningly called Ghouldilocks and drawn by Stan McMurtry (thanks to Lew Stringer for the artist id) had been plucked from the vaults of Fleetway's Jag. 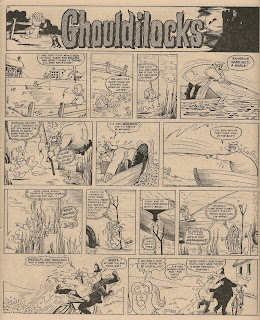 As we already know, thanks to the sterling work of klakadak-ploobadoof (see here), this particular Ghouldilocks episode had originally appeared in Jag dated 23 November 1968 making it, if my maths is right, the 6th episode of its original run.  Despite this character being new to most, if not all, Cheeky Weekly readers, no background was given to the single reprint in the toothy funster's comic, so readers were left to work out for themselves what was going on.  Ghouldilocks explains in the strip that she's a ghost, so it's fairly self-explanatory, but one wonders why the first Ghouldilocks tale, which presumably came with some sort of explanation of the set-up, wasn't chosen.  Maybe it was felt that going through an explanation wasn't necessary since the strip would not return, or maybe the strip had an ending which hinted at future episodes (which introductory strips often had).