The One-Offs - Presto the Magic Rabbit


Most named characters who appeared in only one issue of Cheeky Weekly (and thereby qualify for inclusion in this series of One-Offs posts) were limited to a single page, and quite often a single panel. Presto the Magic Rabbit is unique in being a one-off who featured throughout Cheeky's Week, and even got his own feature in the comic.

Presto, a giant rabbit (or possibly someone in a giant rabbit suit), was hired by Cheeky's pals to put on a special magic show during the cinema interval in the first birthday issue of Cheeky Weekly, dated 21 October 1978. The show appeared as a feature entitled Hey Presto! Magic Show, and Presto was depicted performing a series of carrot-driven conjuring tricks.

Presto had in fact arrived in Krazy Town a week early, and there followed several inadvertent encounters with the toothy funster in the days preceding the magic show. In a scenario reminiscent of 1950 film, Harvey, Cheeky's pals pretended not to see the big bunny. This caused our hero to doubt his sanity but to his relief, the truth was revealed on Saturday. 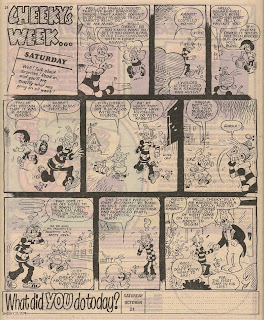 After the magic show, Presto set a word-search challenge for Cheeky Weekly readers, on the back cover's Cheeky's Pal Puzzle. This colour appearance of the conjuring cottontail revealed that he was brown of hue, whereas he had appeared to be white when depicted on the internal pages. 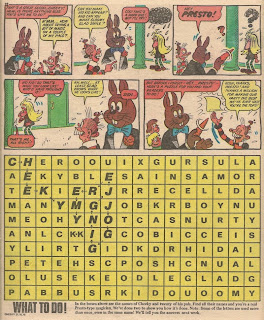 After setting the puzzle, Presto apparently left Krazy Town (possibly in a puff of smoke and with a wave of a magic carrot), as he never appeared in the comic again.

There is a possibility that Presto was in fact the Cinema Commissionaire in a rabbit suit - see here.
Posted by Niblet at 14:16