Cheeky's Pal Puzzle is a title I have given to a series that appeared in Cheeky Weekly for 10 weeks in late 1978. It wasn't really a feature in its own right, but appeared as part of the Saturday feature. However, I feel it's deserving of a mention in my quest to document the contents of the comic so consequently I'm treating it as a feature here.

Puzzle features had appeared in comics for many years, possibly in order that comic publishers could claim there was some educational/intellectually-stimulating content in their output. Sometimes puzzle features had a distinct whiff of 'filler' about them, while others boasted excellent artwork and ingenious posers. Puzzle features are of course distinct from competitions, where a prize is on offer.

Cheeky Weekly's first dabble in the world of brain-boggling came in issue number 45, when Teacher's Teasers began a 3-issue run that came to an end in the 26 August 1978 comic.

The appearance of the first Cheeky's Pal Puzzle coincided with Cheeky Weekly's major revamp in the 30 September 1978 issue, and consisted of a follow-the-lines-to-reveal-the-answer-type poser, a staple of puzzle pages through the years. This puzzle was set by Herman.

The following week's Cheeky's Pal Puzzle was posed by school gardener Dan-Dan the Lavender Man, who asked readers to use their pencils to divide a flower bed into 4 sections, each containing 15 blooms.

Next up was Granny Gumdrop, and readers were asked to unravel the words on her balls of wool to discover what she was knitting and for which of Cheeky's pals her woolly creations were intended.

This brings us to Cheeky Weekly's first birthday issue, when the Cheeky's Pal Puzzle, this time a word search to reveal names of some of Cheeky's Pals, was presented by Presto The Magic Rabbit, a character who appeared only in this issue.

Baby Burpo was the host of the next puzzle - a good, old-fashioned teaser of the spot-which-of-the-pictures-are-the-same variety.

In the next Cheeky's Pal Puzzle, we were tasked with guiding Disco Kid to the disco via a route which would secure him 12 discs along the way.

In the issue dated 25 November 1978, the Cheeky's Pal Puzzle was related to an incident which occurred on the Interval page, where Burpo had launched a custard pie at super-sized cinema snack seller, Ursula, and blamed the toothy funster. In a similar type of teaser to that involving Disco Kid, Cheeky asked readers to guide him home by a route that would take him past Ursula, who was seeking retribution for the custardy assault, the least number of times.

Burpo was the instigator of the puzzle again the following week, as he stuck pins in a number of wax effigies. Readers were asked to match each doll to one of a group of Cheeky's pals, who were seen responding to the voodoo prangs. This was to be the last Cheeky's Pal Puzzle, in the issue dated 02 December 1978 which was reduced to 28 pages from the normal 32, due to industrial action. Burpo was the only character to host two Cheeky's Pal Puzzles.

The canny Cheeky Weekly editor usually made sure that the puzzle answers were given in the following week's issue, thus luring keen brain-busters back into the newsagent 7 days later to shell out a further 9p to find out if their answers were correct. The answers weren't always given on the back page of the following issue; in the 21 October 1978 comic the solution to Granny Gumdrop's puzzle appeared on page 24, and the answer to the Disco Kid puzzle was given on page 25 of the following issue. Fortunately, in the reduced-page issue dated 02 December 1978, the answer to the previous puzzle wasn't among the items that had been dropped from the truncated comic, and was given on page 20. In the second 28-page issue, the solution to the final Cheeky's Pal Puzzle could be found on page 24.

All the Cheeky's Pal Puzzles appeared on the back page and all were in colour, although the Sherlock 'find the magnifying glasses' puzzle was printed in blue and white on an otherwise full-colour page, presumably because the somewhat basic colour printing in the comic wouldn't cope well with the intricacies of the line drawing. 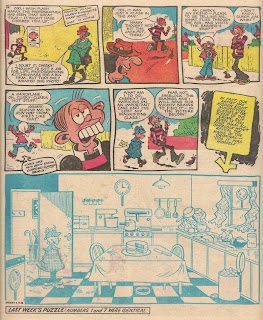 After Cheeky's Pal Puzzle came to an end, the Pin-Up Pal posters resumed their place on the back cover until 31 March 1979, when The Burpo Special moved onto the back page. As of 14 July 1979 until the final issue, Snail of the Century became the most regular occupant of page 32.

Puzzles returned to the comic in the form of a feature named Tease Break, which commenced in the issue dated 17 February 1979. Three mazes drawn by Steve Bell appeared in Cheeky Weekly in early 1979.