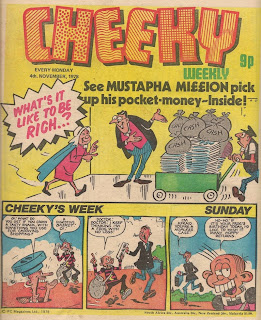 Mustapha Million gets the cover treatment for the second and final time this issue, as readers are asked to consider the question What's it like to be rich? Judging by the accompanying picture, the main drawback is the need to have a wheelbarrow instead of a wallet to transport one's cash. This cover pic is based on a panel from Mustapha's story inside, and it's the last time we'll see work from the mighty Reg Parlett on the Cheeky Weekly cover. I suspect Reg would have done a better cover illustration if he'd been asked to create one specially for the front page, but presumably the Cheeky Weekly editor couldn't fund that. Below Mustapha's massive moolah, Cheeky has a subterranean snigger with Manhole Man, and engages in medical mirth with Doctor Braincell in the Cheeky's Week…Sunday gag strip. 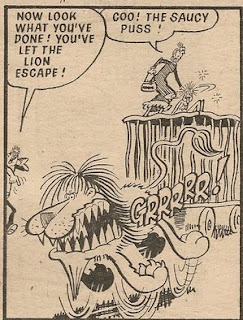 6 Million Dollar Gran runs away to join the circus this week, but in the process of demonstrating her skills to the ring-master, the synthetic senior citizen demolishes the big top. Usual artist Ian Knox is back after a two week break.

On the cover of The Mystery Comic, our portly pal Tub is subject to gymnastic jeers before enjoying football flattery. 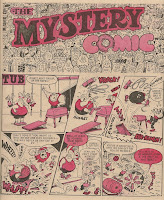 This week's Calculator Kid episode was among the IPC strips that were later reprinted in Spanish comic Zipi y Zape. This week's strip was reprinted in the November 1984 issue of that title, in colour, and a certain amount of resizing was in evidence as the strip's Spanish title, Carlitos Y Su Calculadora, wouldn't fit in the original title panel. I found the Zipi y Zape page here.  On the same thread is a reprinted Rent-a-Ghost page (from Buster), which has also been resized to make the panels slightly taller, so it seems Zipi y Zape had a different page width:height ratio to the IPC comics in which these strips originally appeared, making resizing inevitable. Gracias to Senor Ogro and Investigador Malfendi for posting the scans. 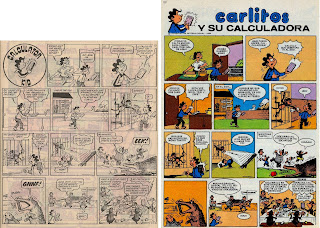 In the reprint, the reference to Cheeky Weekly in the first panel on the second row has understandably been changed to mention Zipi y Zape. However, el cocodrilo is struck dumb in the first panel of the final row. Maybe there is no Spanish word for GNNF!

On Thursday, Willie Brushiton introduces a venerable joke, but it's surprising that the culprit is Baby Burpo with his water pistol - I would have expected the perpetrator to be Walter Wurx, but maybe that would have made the joke too rude. 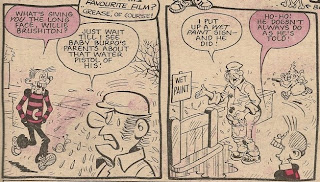 The ingenious Commissionaire takes a tip from Bubblegum Boy to avoid being trampled by the usual horde of cinema-goers on Saturday. Bubblegum boy first took to the air in Krazy comic dated 08 January 1977, so it's clear that his time aloft has affected his ability to calculate the period that he has been airborne. 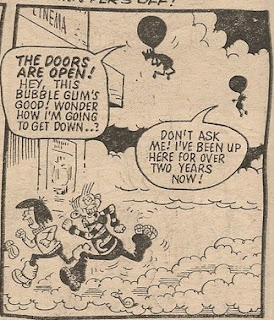 This is the second issue to feature an all Mike Lacey Cheeky's Week (the first being 07 October 1978 which, like this issue, had 10 Cheeky's Week elements).