The features - Elephant On The Run 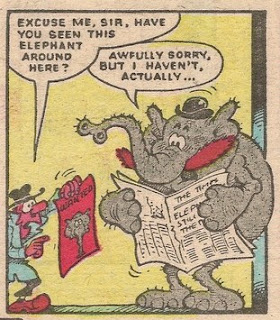 A traumatic circus accident plunges an innocent performer into an amnesiac nightmare, in which he is relentlessly pursued by a mysterious stranger without knowing the reason. Wasn't that the plot of a classic Hitchcock film? No, this was the delightfully daft feature Elephant On The Run, which ran for 63 episodes in Cheeky Weekly. As the strip's title intimates, the hero was of the jumbo variety, and we first met him in the revamp issue dated 30 September 1978... 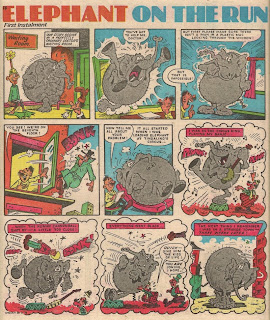 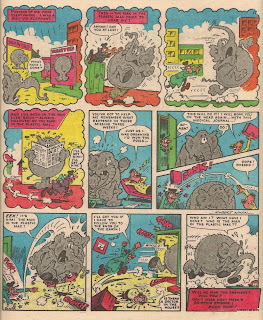 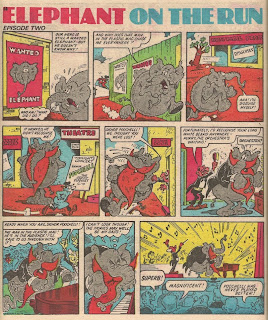 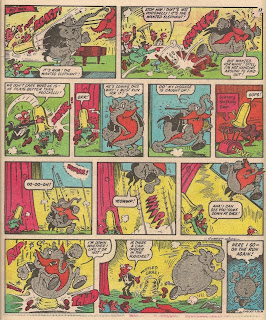 This second episode set the pattern for many of the subsequent instalments, in which our pachyderm pal donned a series of daft disguises or took on unlikely jobs which led him into various scrapes, with his persistent pursuer not far behind. Over the weeks, the jumbo fugitive appeared as a wrestler, beefeater at the Tower of London, footballer and astronaut, among other equally incongruous roles. The dogged chap in the waterproof windcheater would initially be fooled by Elephant's disguise, failing to recognise our trunk-bearing hero behind a seemingly feeble masquerade. Realisation of Elephant's true identity often dawned when the grey-skinned fugitive inadvertently revealed his trunk. The Man In The Plastic Mac (TMITPM) always suffered some (often painful) setback after apprehending the fleeing tusker, allowing our hero to escape, still puzzling over why he was being pursued. Elephant never asked any of the people he encountered, who were also fooled by his flimsy disguises and who must have been aware of what seemed to be a national press and poster campaign to detain him, why he was wanted.

Despite telling us in the first episode that cannot recall who he is, Elephant doesn't seem to notice that, according to a wanted poster in the comic dated 28 October 1978, his name is Walter. Adopting the guise of a portrait painter in his 05 May 1979 adventure, Elephant advertises his services as "Walter Van Tusk - Artist". In the issue dated 29 September 1979, the son of a vet for whom Elephant is working refers to our grey-skinned hero as Uncle Walt. 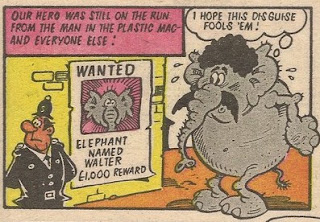 The story that appeared in the 04 November 1978 issue enlightens us further on Elephant's circus career. Scowlo the Clown, an erstwhile colleague of our amnesiac hero, tells TMITPM that whenever the fleeing jumbo hears the tune Elephant Capers played on the banjo, he is compelled to perform a tap dance. Hastily learning to play the melody, TMITPM travels the country plucking his banjo at random passers-by. Despite his frantic twangings eventually unmasking our jumbo chum, who is working as a bricklayer, Elephant of course escapes. 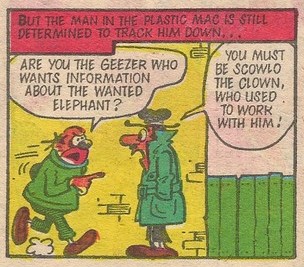 There are further circus scrapes in the 20 January 1979 issue, when Elephant gets a job as a knife-thrower. Naturally TMITPM is by chance in the front row of the big top audience but after a tussle on the high wire our jumbo pal flees to safety. Elephant meets an old showbiz pal, retired magician The Great Mysto, in the comic dated 10 November 1979, and gets a job in Barkums Circus during the 26 January 1980 story.

Elephant's flight from TMITPM takes him across the sea, as in the 27 January 1979 issue we find him masquerading as an italian barber in a skiing resort.

Good-hearted Elephant rescues TMITPM from a number of perilous situations, including digging him out of the snow after he is buried by an avalanche in the 27 January 1979 issue, and safely depositing him in a tree while parachuting to earth after a failed rocket launch in the comic dated 17 March 1979.

A Cheeky Weekly reader is featured in the 28 April 1979 story, and conceals Elephant from TMITPM, telling the peripatetic pachyderm "Well, if they caught you there wouldn't be a story next week, would there?" Two more readers of the toothy funster's comic attempt to misdirect TMITPM in the story dated 21 July 1979.

The 11 November 1978 episode ends with a caption reading 'Next Week - The Tyre Trap!' This was the only episode to feature a coming-next-week teaser. Most episodes ended with a caption saying 'And so the chase continues'.

The story printed in the comic dated 17 February 1979 seems to have been prepared for the Christmas 1978 issue, which failed to appear due to industrial action. It looks to me as though references to the weekend have been substituted where, presumably, Christmas was originally mentioned, and I'd guess that the standard British comic Christmas artefacts (tree, decorations, presents etc) have been removed from the final panel, and Elephant's 'Merry Christmas' has been changed.

The 22 September 1979 story reveals that TMITPM's name is Herbert, when he's seen driving a car with a female passenger who doesn't appear to be his wife.

In the 13 October 1979 issue, Elephant suffers further memory loss when he's hit on the head by a horseshoe. A subsequent bonk on the noggin restores his memory to the state it was immediately before the horseshoe struck, i.e. he remembers he's the wanted elephant and that he's being chased by TMITPM, but it appears the reason he's wanted still eludes our tusker pal.

Elephant visits his rich cousin Sniffy during the 15 December 1979 adventure, so by this time the fugitive has presumably regained his memory of his identity, but he doesn't ask Sniffy why he is being pursued. In the 05 January 1980 story, TMITPM makes a new year resolution to stop chasing Elephant, who is seen resolving to hand himself in to his relentless pursuer. Of course, at the end of the episode, the two protagonists tear up their resolutions.

Elephant On The Run didn't survive the merge with Whoopee! when Cheeky Weekly was cancelled, probably because the strip had started to become rather tired towards the end of its (pardon the pun) run. The final instalment didn't explain the mystery surrounding TMITPM's pursuit of Elephant, it was just a standard episode with Elephant fleeing at the end as usual. A further and rather weak episode, set in a holiday camp, appeared in 1980's Cheeky Holiday Special, but again it was just a chase with no attempt at a resolution of the outstanding questions. The final appearance of the be-trunked fugitive occurred a few months later in the Cheeky Annual 1981, in which our grey-skinned chum was involved in a Christmas caper, but the mystery surrounding our hero's plight was again not addressed. Maybe the scriptwriter never actually had an answer, and that could be another reason why the feature was dropped when Cheeky Weekly ceased publication. I suspect any explanation would have proved a disappointment so it was probably wise to bring the strip to an end without any attempt to tidy up the unanswered issues, leaving us to speculate. One possibility is that Elephant was the heir to a fortune, but this seems unlikely given that TMITPM restrains our large-eared hero with handcuffs, leg-irons and ropes on a number of occasions, not the actions of someone bringing good news.

The daft premise and some clever scripts exhibiting a keen sense of the ridiculous elevate most Elephant On The Run episodes above the standard of the average comic strip, with many laughs along the way. The chase element imparted momentum to the stories, and Robert Nixon did some lovely, fun-filled art. 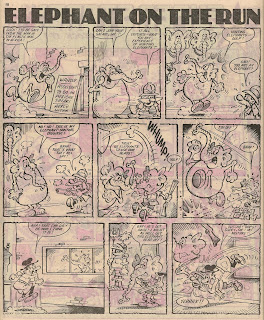 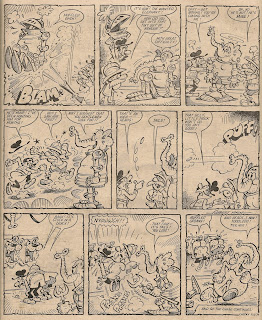 Elephant On The Run made its debut as one of the features in The Mystery Comic. The Mystery Comic concept came to an end in the 30 June 1979 issue, but Elephant On The Run continued until the final issue of Cheeky Weekly. 34 episodes of the feature appeared as part of The Mystery Comic, and of these, apart from the issues dated 16 and 30 June 1979 which were single pages, all were 2-page episodes. 23 episodes were in full colour, 3 had spot colour (black, white and red) and the 21 April 1979 instalment was in black and white except for the title which was printed in red.

29 Elephant On The Run episodes appeared after The Mystery Comic idea was dropped. The first 2 post-Mystery Comic episodes were 2-pagers, but subsequently the strip became a single page only (possibly a sign that the writer was running out of ideas), except for the 06 October 1979 and 12 January 1980 episodes, which were 2-page sets. 7 of the stories during this period were printed in colour, the remainder being in black and white.

The first 2 episodes were the only ones to carry the episode numbers under the title.

Robert Nixon was the original artist on the strip and drew all 34 episodes during the Mystery Comic run. Robert drew 24 of the post-Mystery Comic strips, with Vic Neill providing 4, and Barry Glennard 1, during the same period.

Elephant On The Run was the subject of the main cover illustration on Cheeky Weekly dated 14 October 1978. The picture was actually a blown-up panel from the EOTR strip which appeared the previous week.

In the first 7 episodes, Elephant had what appeared to be sawn-off tusks (or possibly teeth) visible in his lower jaw when his mouth was wide open, but these were not present in the later stories. He did sport false fangs in his upper jaw in the 02 June 1979 story when he convinced TMITPM that he was the vampire tusker, Dracuphant. In the comic dated 08 September 1979, our hero's disguise consisted of a set of false mastodon tusks. Tusks weren't in evidence when the grey-skinned fugitive was the subject of the Pin-Up Pal poster in the 06 January 1979 comic.

The chase crossed over from The Mystery Comic into Cheeky's universe when Elephant and TMITPM fleetingly appeared within the Cheeky Weekly section of the 12 May 1979 issue, dropping a copy of the mysterious publication as they went. Our elephant pal and his plastic-mac-wearing nemesis appeared to have entered into a temporary truce as they were among the guests at Pete and Pauline Potts' party in the 6 Million Dollar Gran strip in Cheeky Weekly dated 06 October 1979.

Elephant On The Run in the Cheeky Weekly Index