Profile - Elephant and The Man In The Plastic Mac 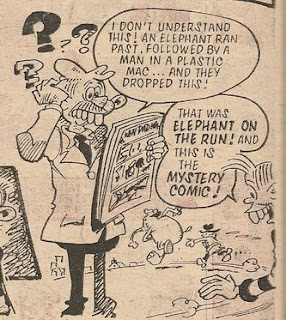 Elephant and The Man In The Plastic Mac were among that elite band of characters who on occasion crossed over into Cheeky's Week, despite their usual adventures appearing outside of the Cheeky's Week framework. Calculator Kid and The Skateboard Squad, whose adventures took place in the toothy funster's universe but in their own strips, were regular guests in Cheeky's Week. However, some crossovers were harder to rationalise, such as Paddywack, who at first appeared to be a fictional character drawn by Doodle Doug, but then made a single appearance in Cheeky's universe, and 6 Million Dollar Gran who from Cheeky's viewpoint was a character in a TV programme, yet seemed to appear in Krazy Town on two occasions (more of which below).

Elephant and The Man In The Plastic Mac are the protagonist/antagonist from the Elephant On The Run strip, which initially appeared to be a work of fiction in Cheeky's Universe, since the framing device set it within the pages of The Mystery Comic.

This assumption was challenged in Cheeky Weekly dated 12 May 1979, when Elephant and his plastic-clad pursuer were fleetingly seen racing through the Wednesday page. Evidently, Cheeky's Dad had picked up a copy of The Mystery Comic which they had dropped, and the final panel of the Wednesday feature, featuring our toothy pal's parent holding a copy of the mysterious publication, introduced that week's issue of TMC, which commenced on the following page. The pair also made the transition into 6 Million Dollar Gran's universe when they were among the guests at Pete and Pauline Potts' party in the Gran strip in Cheeky Weekly dated 06 October 1979.
Posted by Niblet at 16:18

Email ThisBlogThis!Share to TwitterShare to FacebookShare to Pinterest
Labels: Elephant, Elephant On The Run, Profile, The Man In The Plastic Mac