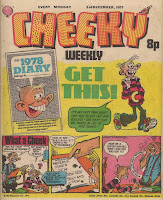 Bubblegum -chewing Fred is still hanging around the cover this week. Prominence is given to the first part of the 1978 diary, and Frank is back on duty with a signed What a Cheek strip.

The Sunday page is also pure Frank, but the remainder of the Cheeky strips inside are 'Frank McDiarmid pencils'.

6 Million Dollar Gran inadvertently springs a convict from jail this issue, and in the process assaults a prison officer.  Gran captures the freed felon and his accomplices, but departs without facing the police - there are questionable moral messages running through some of the stories in this comic ;)

Ian Knox turns in some of his trademark grotesque artwork in the story - one of the baddies gets his head lodged in the mouth of another, and there's a good gag when a workman ejects the dentures of his colleague.

In this week's episode of Fangs of Fear, James Bold almost kills an innocent man when he drives his rapier through a painting after realising someone is hiding behind it, but without knowing who that person is. Rather a reckless act for a supposed hero, and another poor example to set readers.

On the main Wednesday page, the artist invites us to spot the deliberate mistake. I must admit it took me a while to find it. 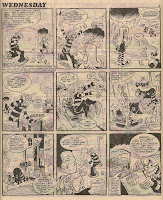 On page 18 there's an in-house ad where Cheeky asks if we have met his comic chums, The Buytonic Boy from Krazy, The Bumpkin Billionaires in Whoopee!, and Joker from Whizzer and Chips.

This week's Home Movie is a spoof on TV's aquatic hero, with Tubby Thomson starring as The Boy from Atlantis.

The art on the inside pages of the 1978 diary is by Jim Petrie, who went on to draw the monthly Cheeky pages, along with two Burpo strips, in Cheeky Annual 1979. 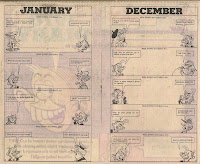 There are two character debuts on the Cheeky pages this issue, the defective detective, Sherlock, appears for the first time on Friday (and is back again on Saturday), and Skatie from the Skateboard Squad is evident on Sunday, as the Squad knock Cheeky off his feet. She doesn't even apologise. What sort of example are they setting our kids?