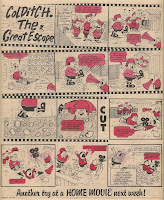 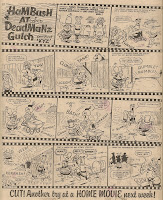 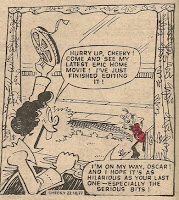 In the early issues of Cheeky Weekly, our toothy hero would view a home movie every Thursday.  These cinematic sensations were created by Cheeky's pal, Oscar.  However, in another of the many inconsistencies that are evident in Cheeky Weekly, the director we see in 'Colditch. The Great Escape' is clearly not Oscar.  This episode is also the only one where the film (denoted by sprocket holes around the comic panels) ends before the page concludes, allowing a few panels of 'real life' to intrude.

The home movies were spoofs of various film genres, but mishaps, usually caused by adults becoming unwittingly involved in the film, invariably occurred during shooting. Evidently Oscar didn't have great editing skills, as all the foul-ups were left in the final cut.

A cast list was shown at the end of the majority of episodes, the most regularly featured actors being Hooter Harrison and Tubby Thomson. An uncredited dog and worm also featured in many of the movies. 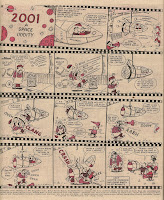 The final Home Movie strip carried the usual 'another Home Movie next week!' banner at the foot of the page.  In the following week's comic, Oscar invited Cheeky to view his latest offering, but Cheeky declined as he was hurrying to look at the skateboard competition on the following page.  Evidently Oscar saw this a a personal affront and stopped making movies as a result.

All the Home Movie pages were drawn by Jack Clayton.