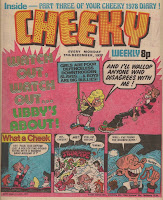 A rather striking cover this week, both in terms of the colour scheme and Libby's threat to do violence with her trusty placard. Snail, evidently in fear of a clout from the feisty feminist, is absent from the front page for the first time in the comic's run.

Inside, Skateboard Squad take a break from foiling international jewel thieves and the like, and instead rescue an incompetent skateboarder in a rather worthy public information film-type message-heavy script.  Unfortunately they don't exercise the same degree of care when forcing Cheeky to climb a lamp post to avoid them while they speed into action on the preceding page. 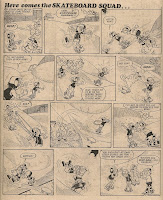 Norman Wisdom appears on the Old Comic page in a reprint from a 1958 Radio Fun. Norman was one of Britain's biggest film stars in the 50s, so I'm not sure why he appeared in Radio Fun rather than Film Fun - I don't think he did much radio work. 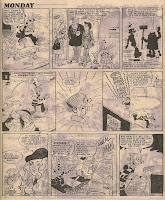 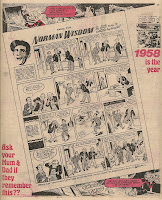 The art on Cheeky's Week in this issue is a mix of pure Frank McDiarmid (3 pages), Frank's pencils (7 full pages plus the cover strip and the conclusion to Wednesday) and a single page by Dick Millington, his first to appear in the comic.  Dick's Friday page is where Libby gets to carry out her threat and fetches Cheeky a nasty knock on the nut.

As the comic settles into a regular routine, there are no character or feature debuts or departures this week.