This feature didn't have a title in Cheeky Weekly, so I refer to it as Old Comic.

Often introduced with a caption that read 'ask your dad if he remembers this', the Old Comic feature presented vintage pages from the comics of yesteryear (i.e. reprints).  The source material was originally published between 1929 and 1969, with the majority of the selections coming from the 1950s.

Some of the choices of celebrity strips seem a bit obscure.  Late 70s kids would probably be aware of Reg Varney from repeats of On the Buses and his later TV work, and they'd know Norman Wisdom because his films were regularly on TV, but Frank Randle is a bit of an niche selection.

Certain strips would appear more than once, with Dodger Caine from Tiger emerging as the most frequently featured character with 3 reprints. 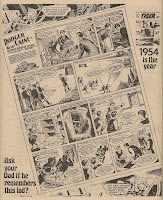 I'm afraid that these titles go way outside my area of knowledge, so I can't attribute artists to any of them.
Old Comic was framed by Cheeky's dad grudgingly buying Cheeky a comic on Tuesdays, complaining that comics are a waste of time and money. Cheeky would then raid his dad's cherished stash of comics in the attic, and show us one of the pages therein.