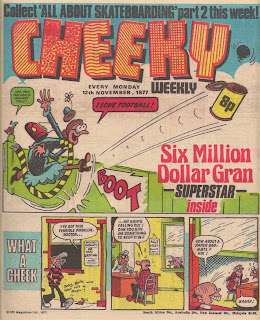 Bubblegum Boy is back on the cover of this issue, alongside Gran who is shown in a blown-up panel from this week's 6 Million Dollar Gran story in which she rescues a kidnapped footballer.  Snail has been added to the Gran artwork, making what is no doubt a topical footie remark.  However, the thing that strikes me is the artwork on the What a Cheek strip, which looks a bit different to Frank's usual style. 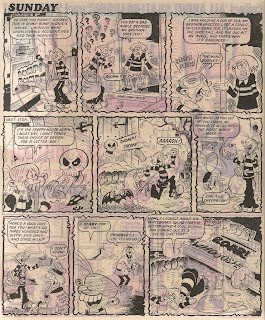 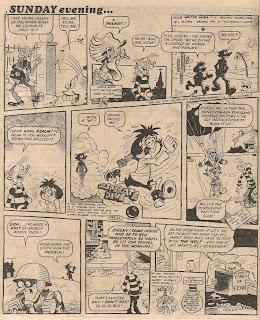 The same seems true of page 2's Sunday strip - it doesn't seem to be pure Frank, somehow.  In fact, the daily strips in this issue from Sunday to Friday have an un-Frank feel (to me at any rate).  The concluding Saturday strip on page 30, consisting of two panels, looks more like Frank's usual work.

As discussed before, other artists ghosted the daily Cheeky pages from time to time.  Some of those artists, such as Dick Millington (see earlier post), are easily identified by their distinctive style, however this issue of the comic has caused me problems in identifying the artist. 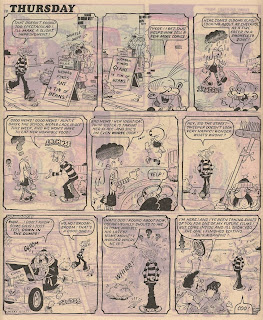 I originally thought the majority of the daily Cheeky art this issue was by Tom Paterson but I got no support when I postulated this theory on the Comics UK forum.  However, RobFilth on the forum suggested that these pages may be Frank's pencils inked by another artist, and Lew Stringer put forward the idea that possibly Frank had an assistant to help him out at times.

My inclination now is that the art assistant suggestion is the most likely answer, so I'm going to record the artist for these pages, and similar-looking pages in later issues, as 'Frank McDiarmid pencils', unless anyone knows otherwise.

Back at the issue under review, pages 23 and 24 carry more joke strips for the Fun Wallet free gift from issue 2.  This issue also sees the surprisingly late debuts in Cheeky Weekly of stalwarts Louise, Gloomy Glad and Cheeky's Mum (although her arm previously appeared in issue 2).