The Other Cheeky Artists - Dick Millington

In his interview in Crikey! issue 12, Frank McDiarmid says that Bob Paynter, Fleetway's Group Editor, wanted to use as much of Frank's artwork on Cheeky Weekly as possible.

However, given the Herculean task of generating the high number of Cheeky features in each issue, not to mention the material that Frank drew for the summer specials and annuals, it's not surprising that other artists were drafted in from time to time.  In this series of The Other Cheeky Artists posts, I'm going to focus on those intrepid pencil-wielders who manfully filled Frank's shoes.

I have to say that I'm certainly not an expert on comics and have no insight into what was happening behind the scenes of Cheeky Weekly.  However I reckon I have a reasonable knowledge of the IPC humour artists of the 70s and 80s.  My attempts to identify artists are just my opinions and you're welcome to disagree.

Dick's first Cheeky artwork was a single page in the issue dated 17 December 1977. 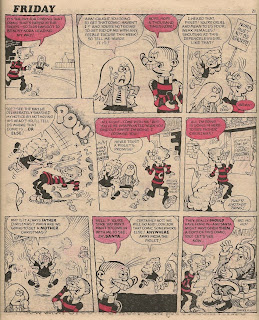 In Cheeky Weekly dated 27 May 1978, Dick drew all the Cheeky features except the front page 'What a Cheek' strip which was by Frank. 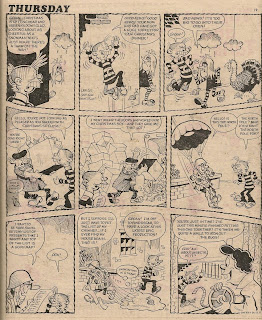 In Cheeky Weekly dated 26 May 1979, Dick supplied the artwork for a 'Star Guest' appearance of Happy Families, the strip he regularly drew in Whizzer and Chips, but since this post is about his work on the Cheeky pages, I won't mention it.

Dick's final stint on Cheeky Weekly was to provide four pages in the issue dated 03 November 1979. 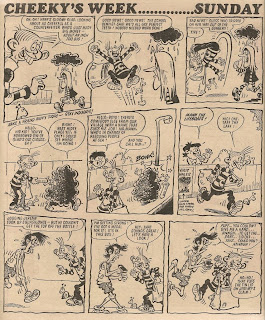 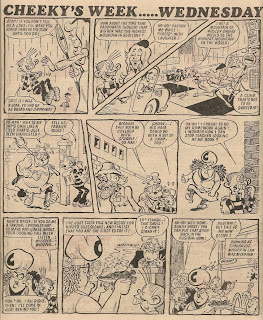 More on the other Cheeky artists in future posts.
Posted by Niblet at 16:45

Email ThisBlogThis!Share to TwitterShare to FacebookShare to Pinterest
Labels: Dick Millington, The other Cheeky artists