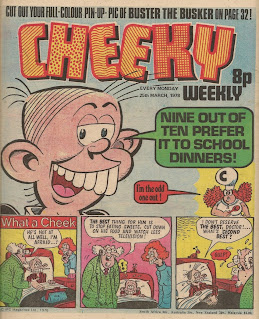 Having enjoyed a few weeks where the main cover illustration was specially-drawn, on this week's front page we get the cut-and-pasted 'standard Cheeky face' which by now is familiar to Cheeky Weekly readers, having been used in the comic several times before, for example in the 'welcome' pages in the first 2 issues.  It's also familiar to readers of this blog as it's used at the top of the page.

Sharing the main section of the cover with Cheeky is Auntie Daisy, the school meals lady, but she doesn't appear inside this week.

Cheeky's Mum makes her cover debut in the What a Cheek strip (she has, of course, appeared inside the comic a number of times by now).  The strip also features a generic doctor character although Doctor Braincell, Krazy Town's merry medic, had made his first appearance in the 11 March 1978 comic, and appears on Friday in this issue.

The Sunday page sees Lily Pop tell Cheeky it's her week off, and on Sunday evening Cheeky meets Iddle-I-Po, stalwart of Cheeky's strip in Krazy comic.  This is the Chinese character's only appearance in Cheeky Weekly, and it seems he has turned up in an attempt to bolster the circulation figures for Krazy, as he's wearing a badge saying 'Save a comic, buy Krazy'.  Cheeky's chirpy Chinese chum looks somewhat different to the version that appears in Krazy.

This week's 6 Million Dollar Gran story is the first to be drawn by Nigel Edwards, and tells of Gran's arrest after being duped into helping a robber.  All ends well as Gran apprehends the real criminal. 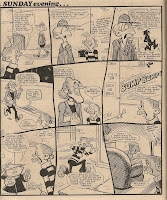 Mustapha Million's bodyguards cause problems when they won't let him play rough games, but Mustapha solves the problem by hiring more bodyguards to guard him from his bodyguards.

In this week's instalment of the film serial, Space Family Robinson discover what lay beneath King Blubber's apparently rubbery hide. 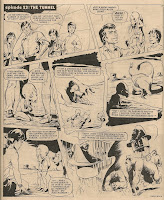 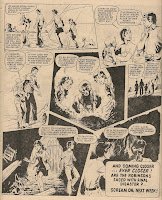 The holiday special season gets under way (in March? isn't that a bit early? I presume IPC have a whole stack of holiday or summer specials planned this year, so have to get an early start) with an ad on page 31 for the Monster Fun Holiday Special.

This is a great issue for all fans of luscious Lily Pop as, despite it being her week off, she appears every day.  It's just a pity that Frank McDiarmid, obviously busy with other work, didn't get to draw her in his own, inimitable style.  Nobody draws Lily with such oomph as Frank.

In fact, there is only one pure Frank McDiarmid element in this issue, and that's the 3-panel conclusion to Wednesday.  Unknown Cheeky Artist 1 weighs in with 6 elements, Barrie Appleby provides 4, and Frank McDiarmid pencils furnish 2 elements.