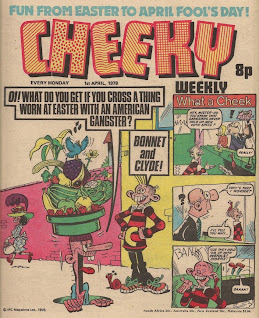 The special Easter issue was an annual treat in many of the humour comics of the 70s.  Though it was some way behind the Christmas edition in terms of the excitement it would generate among its readership, the Easter comic was a welcome departure from ordinary issues, as there would be an Easter theme (not in a religious sense - it would usually feature stories involving eggs, of the Easter variety or otherwise) running through all the humour strips.

For example, Krazy comic had chosen to make its 25 March 1978 edition the Easter issue (the following week's Krazy was the April Fool issue).  In the Krazy Easter issue, Cheeky had enjoyed 3 pages of egg-related fun in his 'Ello it's Cheeky strip, and the Krazy Gang (of which Cheeky was a member) had a page-and-a-half Easter adventure.  9 other Krazy strips had featured Easter-related stories.

However, despite the above-title banner proclaiming 'Fun from Easter to April Fool's Day!', there are only two pages of Easter antics inside this week's Cheeky Weekly.  This is partly due to the 'days of the week' nature of the Cheeky features, which logically limited Easter humour to the Easter Sunday and Easter Monday pages.  However, the Skateboard Squad's adventure takes place on Sunday yet contains no Easter reference.  6 Million Dollar Gran, being a TV show broadcast on Sunday could also have had an Easter theme, but none is present.  At this point in Cheeky Weekly's run, the only strip that we get to see from the Mystery Comic is Mustapha Million's but, assuming the mysterious publication conforms to British comic norms, this week's edition could have been an Easter special.  Sadly, the opportunity to base a story on Mustapha's first encounter with Easter traditions was not grasped and instead we get to see our affluent chum's method of getting to school, involving glider, motorboat and powered skateboard.

The main illustration on this week's front page does feature an Easter theme, with Cheeky's mum on the cover for a second week running.  What a Cheek's joke set in a bank runs vertically down the page, but is not Easter-related, and it can't be an April Fool joke, since 1st April 1978 was a Saturday, and banks didn't open on Saturdays at that time. 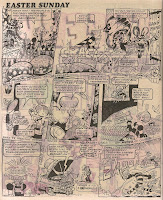 On Easter Sunday Frank McDiarmid's drawing of the monster that hatches in panel 3 seems reminiscent of John Tenniel's Jabberwock in Alice Through The Looking Glass (to my eyes, anyway).

This week Skateboard Squad engage in the high-speed pursuit of a runaway pram, only to find that the occupant is Baby Burpo, and 6 Million Dollar Gran is on a mission to deliver water to a Foreign Legion outpost.

Bunny girl Lily Pop delivers Cheeky to school when he emerges from the newsagent.  Cheeky entered the newsagents on the Easter Monday page, so unless he was reading James Bold overnight, wouldn't the school be closed for the bank holiday? 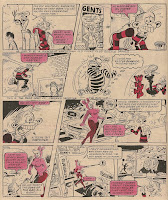 On Saturday, Cheeky is subject to the April Fool jokes of his pals.

The comic rounds off with a Pin-Up Pal poster of Auntie Daisy the school meals lady preparing a seething concoction from which life seems to be evolving.

Unlike the previous 7 issues, there is no 'Cheeky's pal featured throughout the week' in this comic.

There are 5 pure Frank McDiarmid Cheeky's Week elements this issue (Frank also does the honours on the main cover illustration and the Pin-Up Pal poster), and Frank McDiarmid pencils provide the same number, with Jim Watson delivering 2, and Unknown Cheeky Artist 1 contributing a single element.