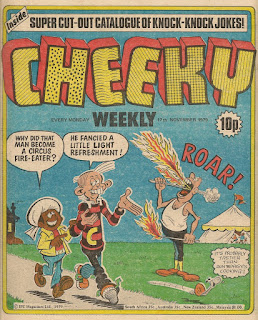 Under a banner announcing the inclusion of a 'super cut-out catalogue of knock-knock jokes', Barrie Appleby provides this week's cover art. Surprisingly, in view of the subject matter, Gunga Jim doesn't chip in his 'curry, curry, hot stuff' catchphrase. Snail however seems mighty pleased with his 'thinks' gag. Did Barrie make a booboo when lettering Snail's thought balloon? Maybe he referred to the disastrous dinner lady as Aunt Daisy, necessitating the addition of a hasty 'ie'.


Three readers are £2 better off as a result of their jokes being featured on Paddywack's page. I wonder if they received their prize money before or after the jokes were published.

With the festive season rapidly approaching What's New, Kids offers some products that kids might like to add to their Christmas lists, including 2 electronic games (they'll never become popular). This is the final appearance of What's New, Kids. 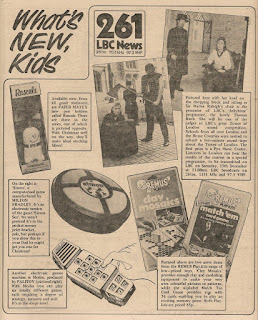 Cheeky's comments on page 9 suggest that this week's cut-out joke book is the first in a series. Ominous. 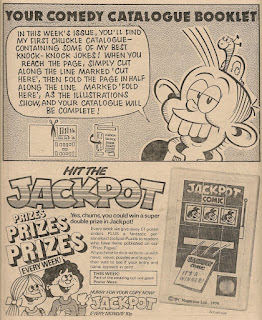 There are further intimations of approaching doom for Cheeky Weekly as a 'new' strip begins a couple of pages later although Soggy the Sea Monster, culled from Shiver and Shake, appeared in the 1979 Cheeky Annual published in the latter part of 1978. The strip chosen to kick off Soggy's Cheeky Weekly reprint run is one of the two episodes from his original outing drawn by Terry Bave. Soggy was the final cartoon strip to join the roster of Cheeky Weekly features as the comic wound down towards cancellation.

The Comedy Catalogue of Knock-knock Door Jokes is located on pages 13 and 14. It seems to me that this is a way to cheaply  fill a couple of pages, which could otherwise carry more comic strips. 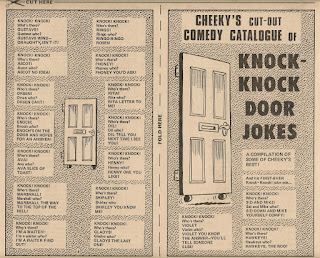 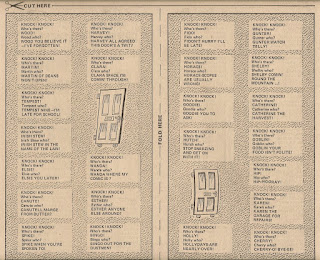 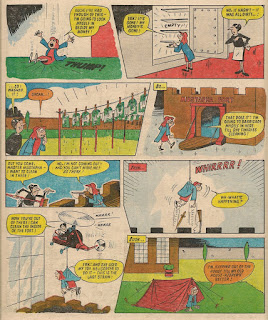 Further ghosting of artwork occurs in Elephant on the Run, where Vic Neill stands in for regular artist Robert Nixon. Vic last subbed for Robert on the strip in the 06 October 1979 edition.

On the Chit-Chat page, Cheeky continues to give us some limited background info on the creative team behind his comic, and this week 'big' John Geering is the subject. 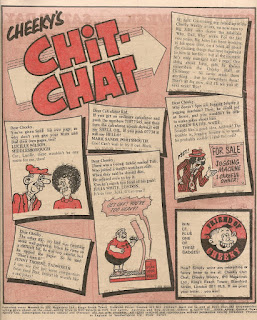 On Saturday Cheeky is ejected from his house as mum is undertaking a thorough cleaning of the premises, forcing the toothy funster to wander the streets exchanging gags with his pals. No change there, then.

Despite his Friday ruse being foiled by Teacher, our grinning pal is seen devising a new homework-avoiding plan at the commencement of this week's back cover strip, Snail of the Century.

With hindsight it's clear that this issue, with its introduction of yet another reprint and instigation of the joke booklet fillers, signals the impending demise of the toothy funster's comic. But on the plus side, Frank McDiarmid draws the whole of Cheeky's Week!