A Cheeky peek behind the scenes

Following the examples of George and Bruce, I thought I'd give a brief tour of my Cheeky collection and allow a little peek into the work behind this blog (it's not just thrown together, you know).

I have only rarely purchased second-hand comics, the majority of my collection (and my entire Cheeky-related stuff) was bought as the titles were being published. My issues of Cheeky Weekly usually live, wrapped in black binliners, at the bottom of a wardrobe, but here they are on a rare excursion into the daylight... 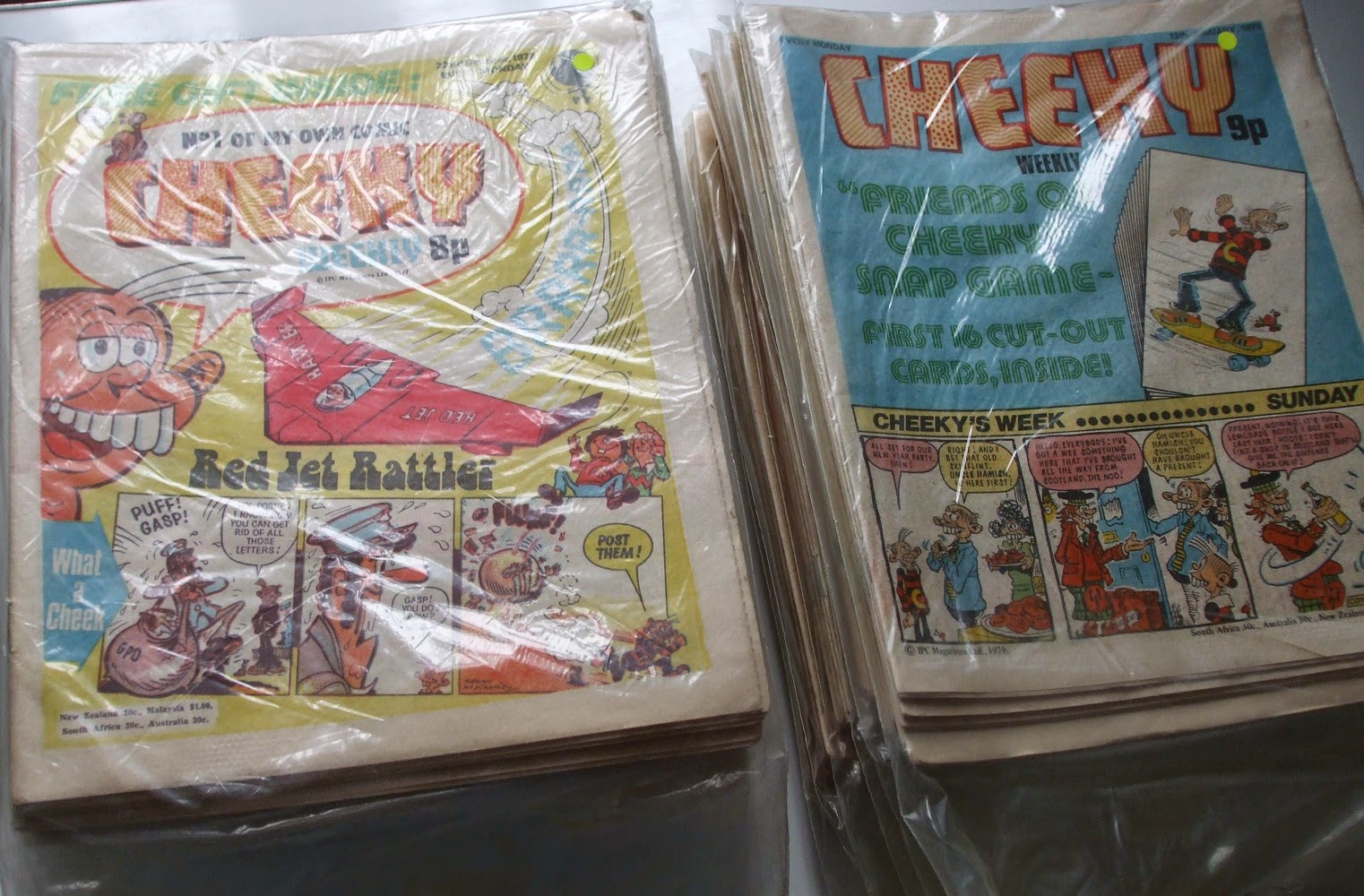 My Cheeky annuals are also usually ensconced in a nice, dark cupboard, but here they are in a rather tasteful (in my opinion, anyway) arrangement... 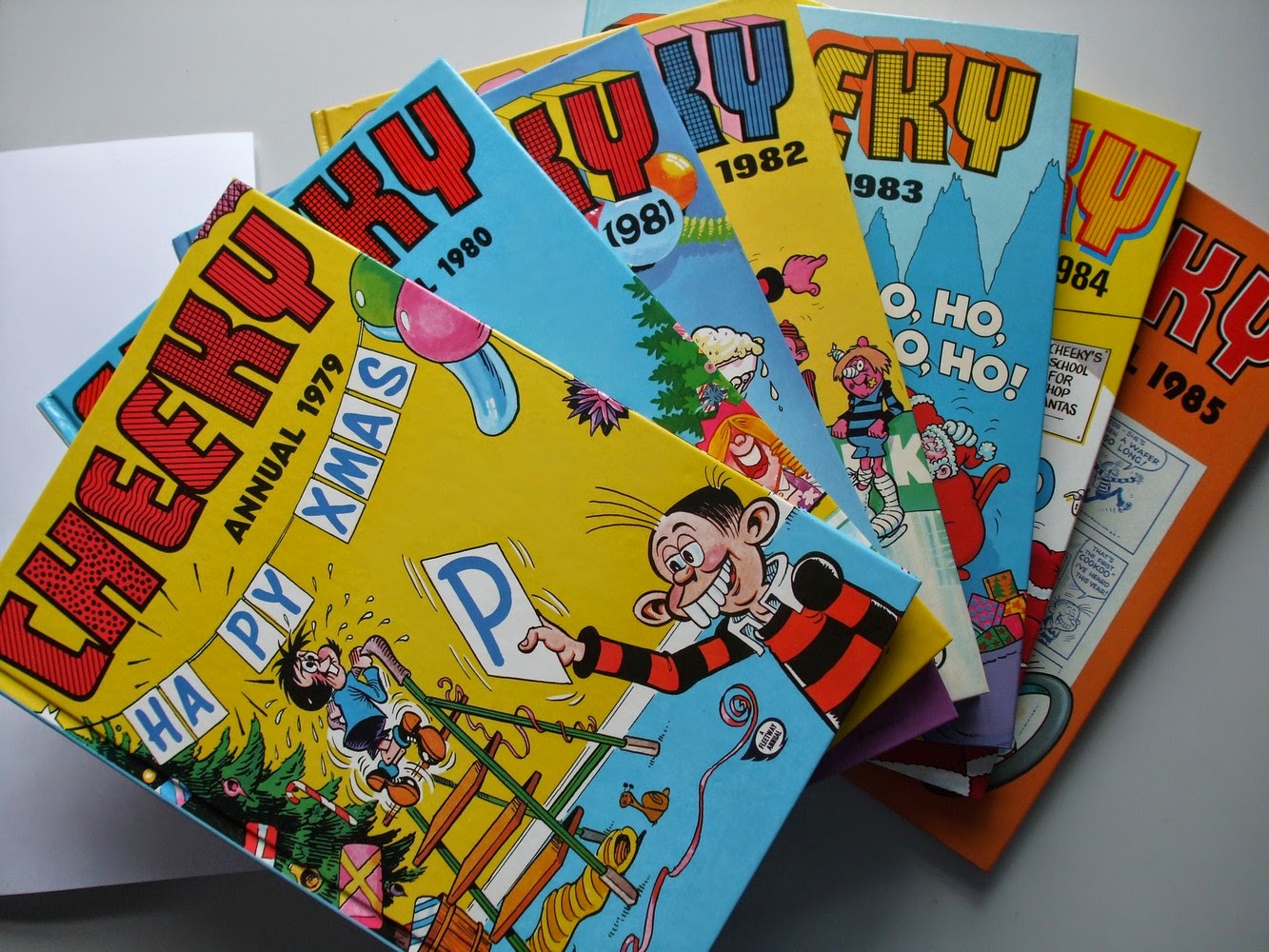 My Cheeky Specials are in a somewhat inaccessible (but also dark) location at the moment, so you'll have to imagine them in a pile.

Here are my Krazys during a brief exhumation from their usual gloomy resting place. 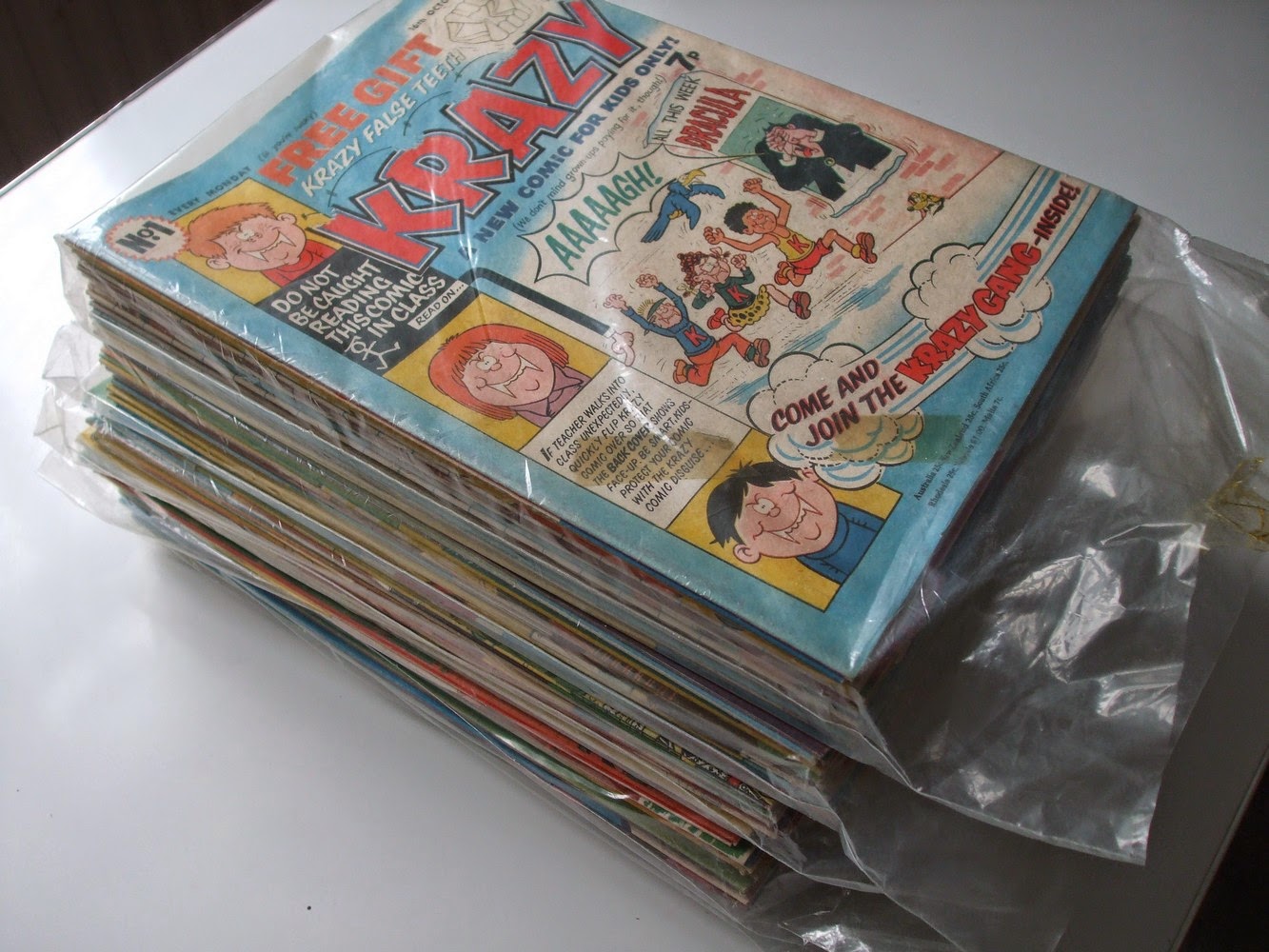 Some years ago I became concerned that my comics may deteriorate, so I decided to begin the long process of scanning them as a kind of backup to the physical copies. I started with my Buster collection (amounting to about a year's run from the mid/late 70s), and was surprised to find that it takes an hour to scan a 32-page comic (I'd assumed it would take about 10 or 15 minutes!), and that's without adjusting the quality of the raw scans. As readers of this blog will know, I decided not to spend any time in modifying the scans, since the task I was undertaking was time-consuming enough without any extra fiddling. Having gained experience in scanning the Busters, I moved on to digitise my Cheeky Weeklys.

I included the comic title, issue date, page number, element name(s) and artist initials in each filename, and as I looked at the slowly increasing list of files I realised that I could do some analysis on the contents of the folder in which I saved the scans. For example using Windows' search facility it would be possible, once all the scans were complete, to isolate all the instances of a particular strip. However, having a background in databases I knew that a comics database would offer far more varied and powerful ways to slice and dice the data. Around this time I also began thinking about writing a comic blog, having been inspired by Lew Stringer's superb work in this field. As I'm nowhere near as knowledgeable about comics as Lew, I thought by sticking to what I know (i.e. Cheeky Weekly), and using the scans I was creating, I might be able to put together a half-decent effort.

I therefore designed and built a comics database, then wrote some code that would read through the filenames in my comic folder and extract and load all the information from the names into the appropriate tables in my then-empty database. After some late-night coding sessions writing the procedures to manipulate the various types of data I nervously kicked the process off and was pleasantly surprised to see that it worked first time.

I then decided to introduce a further level of granularity and recorded in my database all the occurrences of the Cheeky's Week characters by element per issue. This data is used in my Profile series. I also did the same with the characters in the Cheeky strips from Krazy, although that information exists only as a spreadsheet at the moment since I haven't loaded any Krazys into my database yet.

Further time was spent in writing code to do the various types of analysis I use on the blog ( I wrote code to generate the output in the form of HTML tables as well). I'm particularly pleased with the Cheeky Weekly Index, the procedures that isolated the relevant elements and constructed the Mystery Comic tables, and the Cheeky's Week - Artists by issue and % table.

I can't show you the database, as it exists in its own little digital world of 0s and 1s of course, but here's a representation of some of the database tables and their relationships... 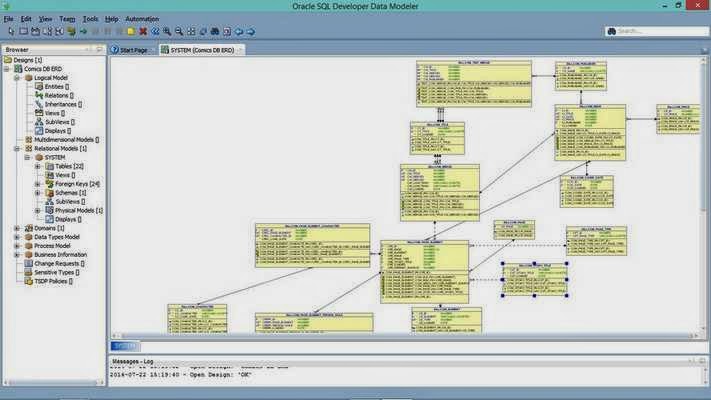 As well as being backups to the physical comics, the scanned comics make doing the research on the blog posts so much easier than continually referring to the actual issues. For example, viewing the files as extra large icons is ideal for scrolling through in search of a particular image. Continually flicking through the real comics would result in them becoming worn. I don't share my scans (other than the selections posted on this blog) - they are purely for my own research.

In addition to working on the 'business as usual' postings that I have been publishing since the blog started, a couple of extra tasks are currently under way...

Since last November I have been scanning my Whoopees with the intention of creating digital copies of all the issues from the Cheeky merge to the end of the comic's run. I'll then load the data into my database to facilitate some planned blog posts on the post-Cheeky lives of the strips from the toothy funster's comic which survived the merge. I had intended to scan an issue a day, but the inevitable intrusion of other commitments has meant my scan rate has dropped a bit recently. I'm hoping I can finish all the scans by the end of this year or soon after.

Reading and partial scanning of post-Whoopee-merge Whizzer and Chips

As time permits I'm currently reading through the post-Whoopee-merge Whizzer and Chips in order to gather material for my series Whizzer and Chips - the Cheeky Raids. This doesn't involve scanning the entire comic, just any raids that involve characters who originated in the toothy funster's title (and I've found a surprising - to me, anyway - number to date, which will be posted in the weeks to come).


Ideally I would like to scan all my Whizzer and Chips in their entirety at some point (I don't have a full run but I have from 1975 to - I think - just before it folded), but at the moment I'm looking forward to completing the Whoopee scans - scanning is not the most riveting of pursuits.
Posted by Niblet at 15:32