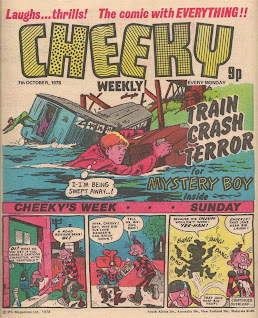 One of the newcomers who made their Cheeky Weekly debut in last week's revamp issue gets pride of place on the cover of The Comic With EVERYTHING!!  Yes it's a watery predicament for World War II amnesiac Mystery Boy.  This cover features two things we haven't seen on the front page since 25 February 1978 - an adventure strip being promoted on the coveted main cover feature, and the appearance thereon of a blown-up panel from inside the comic.  Beneath the main feature, in the Cheeky's Week…Sunday cover strip, Manhole Man emerges from his aperture for some repartee with our toothy hero, who then enjoys a wild west witticism with Six-Gun Sam.

In this week's 6 Million Dollar Gran episode, the synthetic senior citizen comes to the aid of Miss Vera Strict, headmistress of Nollege End School.  The headmistress is distraught because Mister Thrashem, the feared PE teacher, is unaccountably absent.  Ever-enthusiatic Gran steps in to take the PE class and soon the exhausted pupils realise that Old Thrashem wasn't so bad after all. 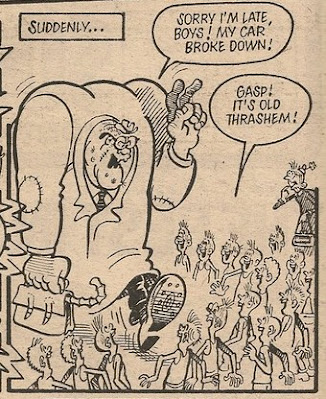 On Monday, Cheeky is made to stand in the corner for arriving late at school, just as Teacher introduces the first episode of new 'edutainment' feature, Laugh and Learn.  This week's episode concerns prehistoric creatures, and Cheeky's humorous interjections into the podgy pedagogue's lecture certainly seem to have originated in the paleozoic era.

Jogging Jeremy makes a guest appearance in this week's Skateboard Squad strip, and this is the first time we've seen Squad leader Skipper without his crash helmet. 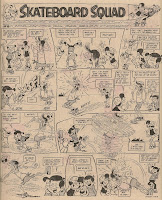 On Wednesday, Flash Harry tells a worried Cheeky that this week's Mystery Comic was printed in disappearing ink.  Fortunately for Cheeky (and us readers who would otherwise be confronted with blank pages in the centre of the comic), the funny photographer hands Cheeky the snaps he took of the mysterious publication before the contents faded away.

Inside said mysterious publication, evacuee cover star Mystery Boy emerges from the train wreck which occurred at the climax of last week's episode, to find that he has no memory of his identity.

Also engaged in a frantic search to uncover his own past is The Mystery Comic's other amnesiac, Elephant On The Run.  The bewildered tusker is still unable to fathom why he's being pursued by The Man In The Plastic Mac.

A new film serial starts this week, so on Saturday Cheeky and pals settle down in the cinema to watch the first episode of spooky pirate tale, The Terrible Trail to Taggart's Treasure.  After this thrilling debut, Cheeky emerges from the cinema onto the back page where this week's Cheeky's Pal Puzzle is set by compost-encrusted school gardener, Dan-Dan the Lavender Man.

Two new features commence this issue in a continuation of the revamp which began last week - Laugh and Learn and The Terrible Trail to Taggart's Treasure (which is in fact a reprint from Shiver and Shake).

Mike Lacey has had a busy week, drawing all 10 Cheeky's Week elements, as well as his usual strips Skateboard Squad and Disaster Des.