The features - The Terrible Trail To Taggart's Treasure

Finding a strip to satisfactorily fill the Saturday adventure film slot, left vacant when James Bold's 41-week run in Cheeky Weekly came to an end in the 05 August 1978 issue, evidently proved difficult. I can only assume that the decision to bring Bold's adventures to an end in Cheeky Weekly was based on economics.  The first feature to represent the adventure film was of course Space Family Robinson, an original series that ran for 36 issues. Following the Robinsons' return to Earth, Bold's final Cheeky Weekly escapade occupied the adventure film slot for 6 episodes (the previous Bold stories had been presented as novels that Cheeky read each week). As we have seen, Bold's adventures appear to have been redrawn versions of scripts originally written for the Maxwell Hawke feature in 1960s issues of Buster. Reusing old scripts presumably reduced IPC's costs, but after the Bold series came to an end, all the subsequent features to represent the adventure film component of Cheeky's Week were straight reprints, thereby paring costs to the minimum.

The first post-Bold adventure film series was Archie's Angels, a tale of aerial derring-do performed by a team of junior pilots, and a reprint from Whizzer and Chips. Archie and his airborne pals hung up their flying helmets after their 6-issue adventure concluded in the 16 September 1978 Cheeky Weekly, and Sonny Storm (reprinted from Cor!! and evidently merely a filler as far as Cheeky Weekly was concerned) moved into the adventure film slot for a single week.

Neither Archie nor Sonny featured the same spooky atmospherics in their adventures as had been memorably evident in the Bold tales, but spookiness, this time of a nautical nature, was about to return to the pages of the toothy funster's comic… 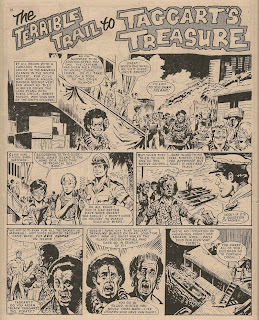 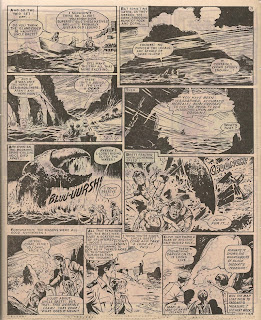 In the second episode, our intrepid castaways study the map and decide it must carry some cryptic indication of the location of Black Taggart's buried treasure. However, setting aside any avaricious thoughts, the trio begin to search the island for some means of escape, encountering looming statues along the way. Suddenly a glowing apparition in pirate garb appears and gestures with his cutlass towards a large wolf-shaped rock, which springs to life and leaps in pursuit of our heroes.

The Masons run for their lives, seeking cover in what appears to be a fog bank, but realise too late that they have entered an area where geysers are spewing steam into the air. The ghostly pirate appears once again to gloat over the predicament in which the fugitives find themselves. Brett hurls himself at the apparition, but falls through one of the geysers and finds a gully leading away from the hot springs. The trio enter the gully and eventually emerge in an abandoned mine where Clive, taking advantage of a few moments' respite from their piratical tormentor, checks a travel brochure and identifies the ghost as Black Taggart, who died on Skar Island over 300 years earlier. This scene is probably included for the benefit of latecomers, since Brett Mason had already expounded on devilish Black Taggart in the first episode.

At that moment part of the mine roof caves in, and Taggart appears once again. With another wave of his cutlass, the apparition causes a fissure to appear in the mine wall, through which water cascades, a deluge which threatens to flood the mine.

As Taggart's ghost dissolves into the shadows, the Masons realise their only chance of escape is to climb the cave wall. So doing, they find a crack in the cavern roof and emerge into daylight just as the torrent fills the underground chasm.

The indefatigable trio strike out to find the coast of the island, and soon enter a valley containing dozens of menacing stone statues. Taggart's voice warns our heroes that a fate worse than drowning now confronts them, and at that moment the statues uproot themselves and lurch menacingly towards the terrified castaways.

Just as the Masons think they can outrun the animated statues, large rocks shoot forth from the mouths of their stone pursuers. Dodging the hurtling boulders, our heroes find themselves standing on the lip of a ravine with the advancing stone figures mere metres behind, preparing for a final rocky fusillade. Grabbing the kids, Brett plunges from the ravine into the river below.

Swept away by the speeding waters, the castaways soon find themselves deposited in a gloomy swamp. As Angela slumps, exhausted, on a mud bank, no-one notices a green tendril snaking its way towards her from the surrounding undergrowth.

Angela's scream alerts Brett, who hurls a large rock at the centre of a carnivorous plant as its hairy tendril wraps itself around the horror-stricken girl. Angela, now freed from the plant's grip, joins with Brett and Clive as they try to navigate a course out of the foetid swamp by following the river, a task made more perilous as the crepuscular gloom sets in.

Spying a light ahead, our heroes think they are coming to the end of the swamp, but are dismayed when they realise the source of the eerie glow is in fact the ghostly seafarer yet again.  Brett, by now suspecting that the figure is not actually a spectre, heaves a rock at it, but the three castaways are aghast as the rock seems to pass through the glowing figure. Angela runs off in panic, straight into the thrashing tendrils of another vegetable carnivore.

As the cackling phantom cruelly looks on, Brett and Clive throw rocks at Angela's plant assailant, but to no avail. Brett realises a more potent weapon is required, and goads Taggart by calling him a coward.  Mason's cunning ruse proves effective, as the enraged ghost unleashes a lambent blast from his cutlass, which rips into the centre of Angela's thrashing attacker, killing it.

As the girl recovers from her ordeal, Brett wonders why the now-vanished pirate didn't turn his power-cutlass on the castaways. Unable to come up with an answer, Brett determines to locate Taggart's treasure before leaving the island, and our heroes move out of the marsh, only to be confronted by a hideous, glowing wraith. The Masons then find themselves hurled into a waking nightmare, as a cackling skull appears, then the surrounding vegetation begins writhing and contorting.  Wailing, ghostly figures - some human, some animal - begin advancing on the trio from all sides.

Another blast from the power-cutlass announces the return of Black Taggart's ghost, who has grown to gigantic proportions. As the eerie figure looms over the fearful castaways, Brett takes up a rock and hurls it.  But Taggart isn't Brett's target -the sharp-eyed leader of the Mason trio has spotted a slide projector atop a rocky ledge, and his well-aimed projectile smashes the device. Taggart's gigantic, glowing figure vanishes simultaneously.

Brett and Angela's triumphant realisation that Taggart wasn't actually a ghost is short-lived, as they become aware that Clive, who was standing at the smoking point of impact of Taggart's power-blast, is nowhere to be seen. All that's left is Clive's travel brochure. 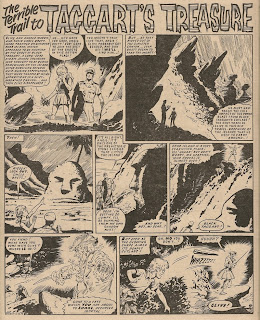 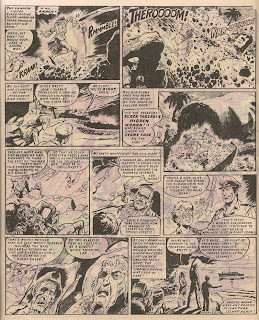 And thus the story reached a happy conclusion (for all except Maddox) in the 9th instalment, with a supposed supernatural threat being exposed as purely human, much in the manner of the James Bold scripts. At least, that was the end as far as Cheeky Weekly was concerned - on its original appearance in Shiver and Shake, where the story as printed in Cheeky weekly ran from 09 June 1973 to 04 August 1973, there was one further Taggart-related feature. Readers of that earlier comic were invited, in a competition that was run the week after the final instalment of The Terrible Trail To Taggart's Treasure, to send in their suggestions as to where on the island the treasure was found. Successful treasure seekers could bag one of the 50 £1 prizes.  To aid their hunt for Taggart's booty, Shiver and Shake readers had been provided with a map which was printed alongside the first 2-page instalment. As this map wasn't printed in Cheeky Weekly, there was no competition associated with the strip on its reprint run.

The second page of the first Taggart instalment in the Cheeky Weekly reprint has been re-lettered, resulting in different placement of some speech balloons, and edited wording in the introductory text box on this page.  I can only assume this was necessary as the original artwork had been damaged and the lettering had become detached. The captions which had appeared at the bottom of the second page of each instalment when first printed in Shiver and Shake (e.g. 'Will Skar Island claim the Masons?  Read on next week?' (sic)) were in the reprints replaced with a similar caption (usually a variant on 'Is this the end for the Masons? Find out next week!') overlaid on the final panel of each instalment, with the exception of the 25 November 1978 episode, which is without such a caption. Presumably it was felt that the concluding panel that week, featuring a pile of smoking rubble in the foreground where Clive had been standing, was dramatic enough on its own.  There is, of course, no 'read on next week' caption in the final episode.

I have not seen the issues of Shiver and Shake dated 21 and 28 July 1973, so cannot compare for any artwork/caption differences which may exist.

In both versions Clive Mason's hair appears to go white during the course of the tale, due no doubt to the strain of the whole affair.

The artwork on Taggart was by Eric Bradbury - thanks to Lew Stringer for his reply to my enquiry on the Comics UK Forum. Thanks also to klakadak-ploobadoof from the forum who provided further information about Taggart's original run in Shiver and Shake.

The Terrible Trail To Taggart's Treasure brought to an end Cheeky Weekly's  run of features based around Saturday morning picture shows. In the 09 December 1978 issue, Cheeky tells us "Some of you readers have been wondering what I do on Saturday afternoons, after I've been to the cinema.  Today, I'm going to watch our local football team". The Saturday feature in all subsequent issues concentrated on the toothy funster's afternoon pursuits.

The seafaring spectre squared off against the Masons on the cover of Cheeky Weekly dated 28 October 1978, which featured a modified (and coloured) panel from within that issue's Taggart episode.

Email ThisBlogThis!Share to TwitterShare to FacebookShare to Pinterest
Labels: Feature, The Terrible Trail to Taggart's Treasure