From Whoopee! dated 10 October 1981 comes this extract from the second instalment of Terry Bave's How To Draw Comic Strips cut-out booklet, allowing us a glimpse of his version of our toothy pal. 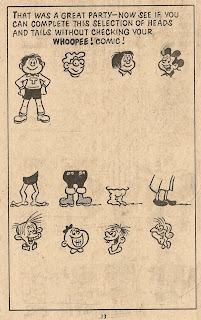 Alongside Cheeky are Terry's versions of other stars who shared Whoopee's pages at the time, some of whom were survivors of the merge of Cheeky Weekly into Whoopee! which occurred in February 1980.  The top row of characters consists of Toy Boy (who was regularly drawn by Terry),  the bibliophile titular character from the Bookworm feature (usually drawn by Sid Burgon), Archie from the Lolly Pop strip (also by Sid at this time although Terry seems to channeling an earlier version from the days when Arthur Martin did the visuals) and Charlie from the Calculator Kid feature (another of Terry's strips), who can also be seen in his distinctive yellow tracksuit top on the booklet's back cover - see below.  Then there's a row of lower halves which feature the young caver from The Cavers (I don't think he was ever named in the strip, which was drawn by Jim Petrie), Jack Clayton's Paddywack from the strip of the same name, Tom Paterson's Sweeny Toddler, who was actually bumped from this particular issue by Terry's booklet, and the distinctive lower portion of Mustapha Million, who was drawn in Whoopee! at this time by Joe McCaffrey.

The final row of faces commences with a familiar toothy gagster, followed by Nick Baker's Smiler, Mike Lacey's Billy Bumpkin from The Bumpkin Billionaires, and Gran who had regenerated from 6 Million Dollar Gran into Robot Granny by the time this issue was published, and was drawn in the weekly strip by Ian Knox.

This was the second of Terry's How To Draw Comic Strips booklets to feature in Whoopee!  Terry was a stalwart of IPC's comics at this time, and I really enjoy his style of drawing, which is particularly appealing when he depicts characters with beaming smiles.

Email ThisBlogThis!Share to TwitterShare to FacebookShare to Pinterest
Labels: Terry Bave, The Other Artist's Cheekys