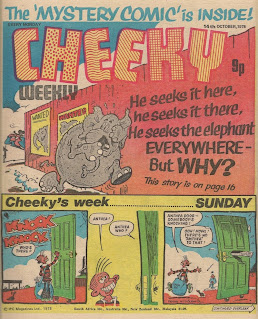 Cheeky Weekly completes its first year of publication with this 52nd issue.  There are amnesiac animal antics on the cover, as Elephant continues to evade his plastic-clad pursuer in a blown-up panel from last week's Elephant on the Run episode.  Below that, Bubblegum Boy is back on the front cover for the first time since the 13 May 1978 issue, still stranded in the sky above Krazy Town while, far below, the toothy funster engages in daft, door-derived drollery.

On Tuesday our favourite merry mollusc gets all love-struck as he meets a glamorous gastropod, and we observe a rare occurrence of Cheeky acknowledging the existence of his slithering sidekick. 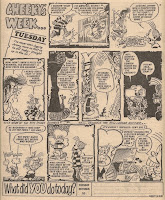 This week's cover star uses a false moustache and bowler hat to evade capture by The Man In The Plastic Mac at the start of the latest instalment of Elephant On The Run.  The peripatetic pachyderm then finds himself employed in the grappling game as a masked wrestler.  Our jumbo hero is dismayed when he spots TMITPM among the audience as his first bout commences, and the situation deteriorates rapidly when Elephant is unmasked by his opponent.  In the punch-up that ensues, TMITPM gets entangled in the ropes and our large-eared hero makes good his escape, concluding an agreeably daft episode. 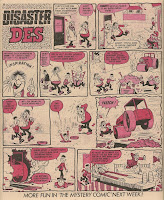 In a rather over-familiar script idea, Calculator Kid, with the help of his electronic pal, unmasks a burly, female-impersonating jewel thief, just as a policeman happens to be passing, in his story this week.

Rounding off the comic is the back cover's Cheeky's Pal puzzle, this week a knitting-based poser featuring Granny Gumdrop.

Robert Nixon draws the main cover feature this week (albeit in a panel lifted from last week's comic), the only time his art would appear on a Cheeky Weekly cover. 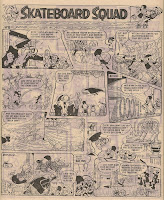 One year in, and already the comic seems to be relying rather a lot on one-off fillers.  Like the Hickory Dickory Doc and Sonny Storm reprints, used in the 16 September 1978 and 23 September 1978 issues respectively, this week's Ghouldilocks feature (a reprint from Jag - see below) will not return.  Thanks to Lew Stringer who, on the Comics UK forum, identified the artist on this strip as Stan McMurtry.

Also on the forum, klakadak-ploobadoof was able to clarify where this strip had originally appeared;

"I looked through my collection and notes and this is what I can say regarding Ghouldilocks: there were two series, both drawn by the same artist. The first series had a short run in Jag and lasted only 18 weeks from October 19th, 1968 until the last tabloid-sized Jag dated Feb. 15th, 1969. The second series in Shiver and Shake began in issue No. 22 (August 4th, 1973) and enjoyed a considerably longer run of 44 episodes, ending in issue 67 (June 15th, 1974) (there was no Ghouldilocks in Shiver and Shake issue 54 dated March 16th, 1974). I was surprised to discover that only 5 of the original Jag episodes were reprinted in the second series.

Niblet, the episode [printed in Cheeky Weekly] is a reprint from Jag dated 23rd November, 1968, and it wasn‘t one of the reprints that appeared in Shiver & Shake."

Many thanks to klakadak-ploobadoof for this excellent piece of research.

UPDATE 16 March 2012 - The ever-reliable klakadak-ploobadoof has unearthed some more information about this strip;

"I have a new piece of info to add with regard to the Ghouldilocks episode reprinted in Cheeky. Accidentally I discovered that I wasn't completely right that it wasn't reprinted in Shiver and Shake. Indeed, it didn't appear in the weekly comic proper, but in 1973 IPC companion comics Whizzer and Chips, Knockout and Cor!! all had a feature called Star Guest where strips from one comic made guest appearances in the other papers. The episode that you showed was reprinted in Cor!! dated 1st December, 1973 and Ghouldilocks was introduced as a Shiver and Shake favourite."