Unlike some of the inhabitants of Cheeky's Week, Doodle Doug, the aspiring comic artist, had not previously appeared among the roster of characters in the 'Ello It's Cheeky strip in Krazy before his debut in the first Cheeky Weekly.  Doug went on to clock up appearances in 86 issues of Cheeky Weekly, surviving into the final issue.

Doug's purpose in the early issues was to draw a short gag strip that he would show to Cheeky on Tuesdays after the toothy funster had taken a sneaky look at a select item from his dad's hoard of old comics.  Doug would threaten to tell Cheeky's dad that his son had been rifling through his copies of Knockout, forcing Cheeky to publish Doug's artwork.

This early blackmail phase in Doug's Cheeky Weekly career came to an end in the 14 January 1978 issue of the comic, as Doug did not appear again until 08 July 1978, when he resurfaced to tell Cheeky that he had drawn a whole page about a character called Paddywack.

Cheeky, evidently impressed, published Doug's Paddywack strip on the following page and thereafter Doug would hand Cheeky his latest Paddywack strip each week, often reminding Cheeky that a £2.00 prize would be sent to readers whose jokes were used on the Paddywack page.

In early issues there was a running joke when Frank McDiarmid drew Doodle Doug, about Frank regarding Doug as a rival. 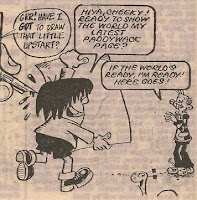 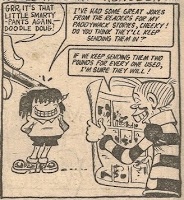 In Doug's initial phase in the comic, he appeared on Tuesdays, and when he returned with the Paddywack strips, Doug continued his Tuesday run.  However, when The Mystery Comic took up residence in the centre pages of Cheeky Weekly as from 30 September 1978, Doug moved to the Friday feature where he continued to hand Cheeky the latest Paddywack strip.  Things changed again in the 09 December 1978 issue because the adventure story, The Terrible Trail To Taggart's Treasure, had ended the previous week and as a result Doug found himself back on the Tuesday page (with one exception) up to and including the issue dated 30 June 1979, which was the final issue to feature The Mystery Comic.

The demise of the Mystery Comic (at least as a conceptual grouping of strips in the centre of the comic, because the characters continued to appear in Cheeky Weekly) was a consequence of Cheeky Weekly's 'new look' that introduced a number of changes, one of which was that Paddywack now followed the Mystery Boy strip.  After missing the 07 July 1979 issue, Doug was back in the comic the following week, on the Wednesday page this time, sharing a joke with our toothy hero but with no mention of Paddywack who had now embarked on a life independent of Doug.  From this point on, Doug wasn't limited to any particular day, but became a source of art-based puns when required, puns that were recycled on occasion.

In the 28 July 1979 issue, Doug appears on 2 pages as he gives a Saturday art lesson to Cheeky's pals. 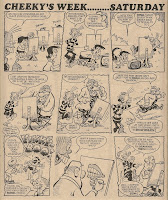 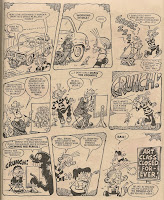 Doug made it onto the cover of the 05 January 1980 new year issue, on which he was seen leaping, along with a selection of Cheeky's Pals, in a reference to the fact that 1980 was a leap year.