This is the second part of a series which aims to answer the question, What, if any, Cheeky-related material was included in the Whoopee Specials and Annuals published after Cheeky Weekly was incorporated into the weekly Whoopee! in February 1980?

My investigations in part 1 revealed that the only Cheeky reference in the Special and Annual published in 1980 was an ad in the Whoopee! Summer Special (but I found a nice selection of Frank McDiarmid art in the Annual so time spent reading that post won't be wasted if you haven't already looked at it).

These are the 1981 adverts for Specials and Annuals as they appeared in Whoopee! and Cheeky, and latterly Whoopee! after reference to the February 1980 merge with Cheeky Weekly was dropped from the title as of August 1981.

IPC were really trying to boost sales of their Specials, as the 18 and 25 April, 02 May, 20 June and 25 July editions of Whoopee! and Cheeky each carried 2 ads for Specials, while the 27 June edition included ads for the Cheeky and Whoopee! Summer Specials together with the Buster Puzzle Summer Special.

1981 saw the publication of the penultimate Whoopee! Frankie Stein Holiday Special. Although it was admittedly unlikely to contain any strips relating to the toothy funster or his pals*, we can remove any doubt about the matter as Irmantas has comprehensively documented the contents of the Frankie Special and reports no Cheeky material.

*Having said that, we will encounter an unlikely non-Cheeky Annual appearance of a Cheeky Weekly stalwart later in this series of posts. 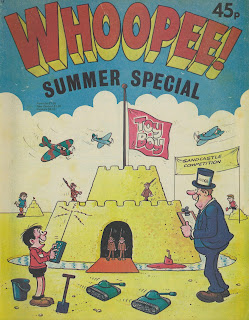 Last year's Special cover stars, The Bumpkins, have been replaced by Toy Boy, who's on the beach paying sandy homage to The Beano's General Jumbo in a suitably summery scene drawn by the ever-reliable Mike Lacey.

OK, let's get straight to the point - the only Cheeky-related reference in this year's Special is, as was the case last year, the cover of a copy of Whoopee! and Cheeky in the advert on page 63. However, the cover chosen to be included in last year's equivalent ad featured our grinning chum's ugly mug, whereas this year the comic is represented by the front page of the issue dated 29 November 1980, from which the toothy funster was absent, although the Cheeky contingent is represented by the cover star Paddywack. 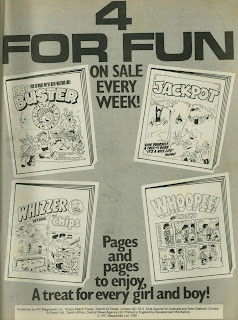 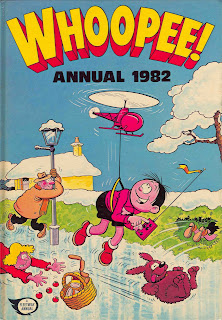 The first formal advert for the Whoopee! Annual bearing the cover year 1982 appeared in the weekly Whoopee! dated 29 August 1981. This was an ensemble promotion featuring 11 titles from this year's collections of funnies, multitudinous copies of which publisher IPC were hoping would be stowed under the Christmas trees of the nation. However, the first mention of Whoopee! Annual 1982 came in the form of an apology which appeared in the corner of the first Whoopee Chit-Chat page in Whoopee! and Cheeky dated 25 July 1981...

Ironically, Bookworm was the character to suffer the consequences of reverse pagination.

The Bumpkin Billionaires appeared on the covers of 1980's Special and Annual. A similarly consistent cover-star policy seems to be in force again this year, but the featured character is Toy Boy, who is seen on the front of the Annual manipulating his remote control, as he was on the Special's cover. The icy Annual cover scene is rendered by Mike Lacey once again.

As also was the case last year, there is no Cheeky-related material in this Annual, despite Cheeky and certain other survivors from his comic having been incorporated into Whoopee! as of February 1980. Although the final issue to be designated Whoopee! and Cheeky was cover-dated 25 July 1981, the Cheeky contingent continue to appear in the weekly Whoopee! (I am, as is my wont, using the historical present tense here, of course, to describe the situation at the end of 1981), but Cheeky and his pals have appeared in his own Special and Annual this year, so it's not surprising that there is no toothy-funster related material in the Special and Annual produced in respect of Whoopee!

As mentioned above, last year's Whoopee! Annual boasted a number of pages drawn by the mighty Frank McDiarmid, but Frank's work in this year's Annual is limited to a single page, as he takes on the task of ghosting an escapade concerning cover star Toy Boy (who is on this occasion sans remote control). The obvious resizing suggests this is a reprint. 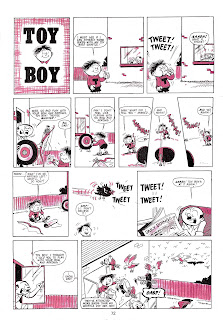 Regular Toy Boy artist Terry Bave is on hand to illustrate 2 of the 4 adventures of the plaything-obsessive to appear in this Annual (although Terry omits to include this Annual in the list of his work at the rear of his Cartoons and Comic Strips memoir, at least in my copy - the book may have been revised since), with Mike Lacey doing the honours for the remaining episode, which is presented as the finished article at the conclusion of a sequence explaining the various stages of production in a 'how comics are made' feature. 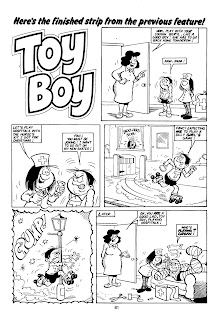 My attention will soon turn to the Whoopee! Special and Annual published in 1982.

Email ThisBlogThis!Share to TwitterShare to FacebookShare to Pinterest
Labels: Whoopee Specials and Annuals