The Cut-Out Features - The Cheeky Spotter Book of Fun

There was no Tuesday page in the issue of Cheeky Weekly dated 31 December 1977 (that year's Christmas edition). A caption at the top of page 14 informed readers that the toothy funster slept through the whole of Tuesday. Cheeky had been previously seen in that issue at the Vicar's Boxing Day party, so it would appear that our grinning pal had overindulged on jelly and ice cream. A Cheeky's Week page without the toothy funster could have been quite interesting, but IPC's management had other plans and it was replaced by an announcement that would have readers either groaning, or else readying their scissors, in anticipation of The Cheeky Spotter Book of Fun, part one of which would appear in the following week's comic. 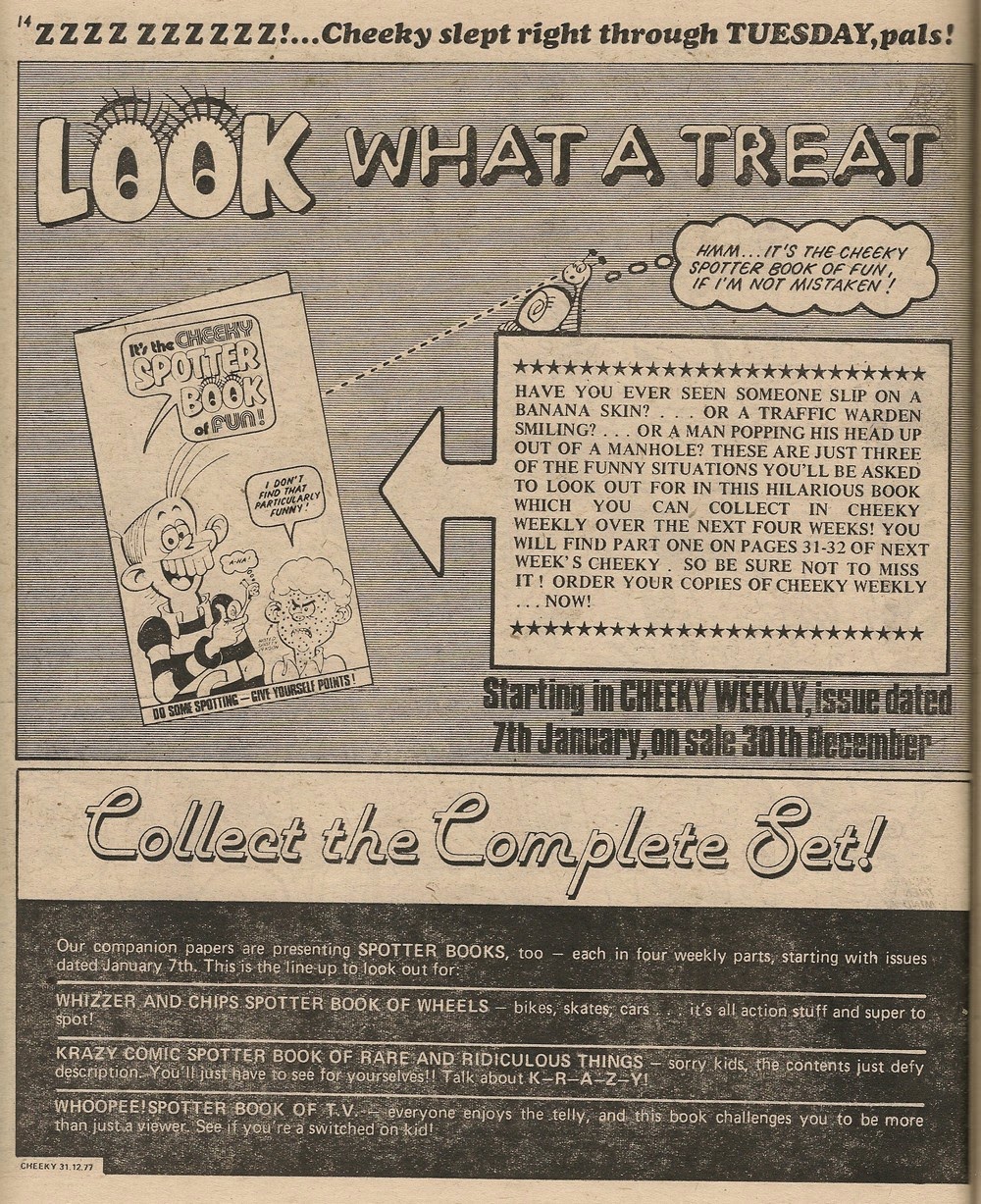 Readers contemplating dropping Cheeky Weekly in favour of sister comics Whizzer and Chips, Krazy or Whoopee! over the next four weeks in order to avoid the forthcoming pamphlet were thwarted by IPC's decision to run cut-out booklets (on different topics) in those titles as well.


Judging by the frequency with which they used them, IPC must have found their cut-out feature promotions to be successful.


The book was launched with full front-cover treatment in Cheeky Weekly dated 07 January 1978 as the toothy funster announced 'Hey, Pals! You'll have some fun with this!'. Loyal Friends of Cheeky who stuck with the toothy funster's title would have found that this cut-out book actually wasn't half bad. Instead of one of those rather worthy keep-the-kids-quiet-in-the-back-of-the-car style of books in which junior travellers won a point every time they spied a post box, The Spotter Book of Fun was a humorous affair featuring Cheeky and his pals, plus it had the considerable bonus of being drawn by the great Jim Petrie, most famous for his long run on Minnie the Minx in DC Thomson's The Beano.

My copy of the Book of Fun's cover (above) has what appears to be a printing error that renders the unfortunate spotty kid even more severely afflicted as he seems to have contracted jaundice in addition to raging acne. It's evidently highly contagious as Cheeky's hand is developing the symptoms. These problems weren't apparent in the image of the booklet's cover on Cheeky Weekly's front page, although there does seem to be an issue with the kid's shirt.


In the four Cheeky Weekly issues from 07 to 28 January 1978, pages 31 and 32 contained an installment of the Spotter Book, each printed sideways and designed to be removed, folded in half and compiled into a 16-page pamphlet. Siting the Spotter Book installments on the last two pages of the comic meant that each week the pages of the booklet printed on page 32 were in colour, although for some reason in the 14 January 1978 edition page 32 was printed in red-and-white/blue-and-white only.


This was to be Jim Petrie's final work in Cheeky Weekly (his first work for the toothy funster's title appeared in an earlier cut-out series, the 1978 Diary), although he contributed most of the Cheeky pages in the 1979 Cheeky Annual which went on sale in autumn 1978.

Cheeky Weekly carried another multi-part Spotter Book, 'Cheeky Spotter Book of Town and Around', in May/June 1979 but it consisted of entirely straight 'spots' of the 'score a point if you see a litter bin' variety.
Posted by Niblet at 15:19