Ding-Dong Debbie was introduced to Cheeky Weekly readers by way of a Knock-Knock Door joke in the 02 September 1978 issue.  Judging by Debbie's appearance in that first strip, she could well be related to Gloomy Glad.

Debbie 's demeanour had improved considerably by the time she returned in the 14 October 1978 comic, in fact she looked positively manic in the first panel.  Admittedly, not so good in the second. 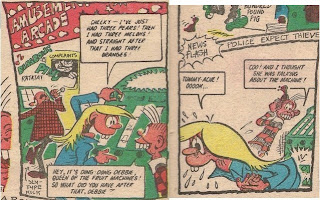 Two weeks later Debbie was back, and her earlier experience had obviously been so traumatic that fruit was now firmly off the menu. 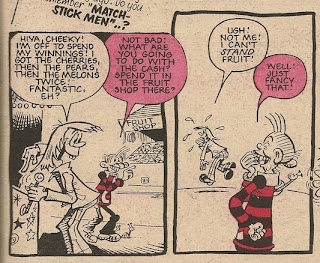 In 09 December 1978's issue, Debbie provided Cheeky with his copy of The Mystery Comic.

After an absence of 24 issues, the giddy gambler returned for one more time in the 26 May 1979 comic, bringing to an end a run during which she appeared in only 5 issues. 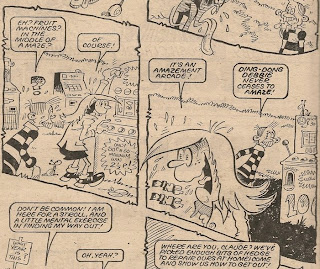