The Pin-Up Pal feature presented a series of full-colour posters that featured Cheeky, his pals and certain characters with a tangential connection to Cheeky's Week.

The first Pin-Up Pal was Cheeky himself, in the debut issue of Cheeky Weekly. The poster was located at the middle of the comic, and so benefited from being spread across 2 pages. The following two issues included 2-page centre-spread posters of 6 Million Dollar Gran and Mustapha Million respectively. All the subsequent Pin-Up Pal posters were single pages only, but all were full colour.  After the Mustapha Million poster in the 05 November 1977 issue, there was a break of several weeks until the next poster, which featured Lily Pop, appeared in the comic dated 18 February 1978.  Thereafter the posters appeared on average twice a month (although this figure is skewed slightly by the fact that no P-UPs appeared in October and November 1978) until 06 January 1979, from which date a Pin-Up Pal appeared in every issue until the feature ended with the Skateboard Squad poster in the comic dated 31 March 1979. 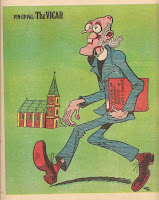 As mentioned above, some of the characters featured on the Pin-Up Pal pages were not actually inhabitants of Cheeky's universe.  6 Million Dollar Gran was linked to Cheeky's Week by being a character from a TV programme, despite being shown in the background of a Skateboard Squad story.  Mustapha Million, The Elephant from Elephant On The Run, Disaster Des and the Why, Dad Why pair were all characters from The Mystery Comic which Cheeky would track down and read each week.

Interestingly, Paddywack existed in a quantum-particle-like indeterminate state in Cheeky's universe, appearing both as a character drawn by Doodle Doug and as an actual inhabitant of Cheeky's world, interacting with the toothy funster during the cinema interval in the comic dated 02 September 1978. 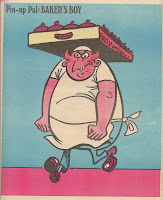 The artwork for the majority of the posters was specially prepared, but those featuring Baker's Boy, Square Eyes, Dan-Dan The Lavender Man and the Skateboard Squad were copy-and-paste jobs from comic panels, sourced from Tuesday 11 November 1978, Friday 25 November 1978, Thursday 25 November 1978 and the Squad's strip 03 February 1979 respectively. Those same four images had previously been used in the Friends of Cheeky Snap Game that commenced in the comic dated 13 January 1979.

Pin-Up Pal was one of the most stable of Cheeky Weekly's features in terms of location - for 35 of the issues in which it appeared it occupied page 32 (aka the back cover).  In the issue dated 09 December 1978 it appeared on page 28 which was the back cover, as that week's issue had a reduced page count due to industrial action.  The 4 other occasions on which Pin-Up Pals appeared on pages other than 32 were in the first 3 issues of the comic in which, as already mentioned, the feature appeared across centre pages 16 and 17, and also the issue dated 16 September 1978 (see below). 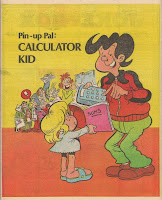 Though it appeared in 39 issues, the Pin-Up Pal feature actually featured in the comic 40 times.  How so?  Well, the issue dated 16 September 1978 featured two separate Pin-Up Pal posters, one featuring Calculator Kid (drawn by Frank McDiarmid although the regular CK strip was by Terry Bave), and the other showing Disco Kid strutting his funky stuff.  That week the first of the centre pages was taken up with the final, full-colour part of the cut-out Crack A Joke game, leaving a single, full-colour page available.  That page was allocated to the Calculator Kid poster (which features then-Chancellor of the Exchequer Denis Healey among those queuing up to get their figures, in Healey's case, the budget, sorted out by Charlie's calculator), while the Disco Kid poster occupied the usual Pin-Up Pal location, the back cover. 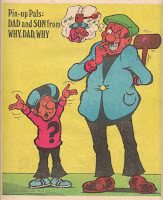 Of course, in saying the feature appeared 40 times, I am counting the 3 centre-spread posters as single appearances.

Frank McDiarmid drew 32 of the posters.  For the breakdown of the remaining artists, please see the table below.  As you'll see, all the posters whose subject was not an inhabitant of Cheeky's Week were drawn by their respective regular artists.

After the Pin-Up Pal series finished, The Burpo Special took up residence on the back page, appearing there 12 times until displaced by Snail of The Century, which appeared on page 32 in 25 issues.

You can see a gallery of the Pin-Up Pal posters at Bruce's blog.