A week after Mustapha was raided by Slippy in the 16 September 1989 edition of Whizzer and Chips, head Whizz-kid Sid announced the resumption of weekly reciprocal raids (after the moratorium on new raids was lifted in the 12 August 1989 issue, raids had been limited to a single one each week, alternating between a Whizz-kid incursion into Chips one week, and a Chip-ite foray into Whizzer the next).

Thus it was entirely possible under the reintroduced 2-raids-a-week regime that a character could be both perpetrator and victim, and the next issue to involve Mustapha in a cross-comic sortie (28 October 1989) did indeed see him in both roles.

Mustapha struck a blow for the Chip-ites by intruding upon the somewhat disturbing romantic entanglement of Bobby with his girlfriend from beyond the grave. The strip's title was a pun on Susan Maughan's 1962 recording of Bobby's Girl, a reference of which few Whizzer and Chips readers in 1989 would have been aware.


Can you spot the gate-crasher in Mustapha's pages?  Scroll down the discover the identity of the infant interloper. 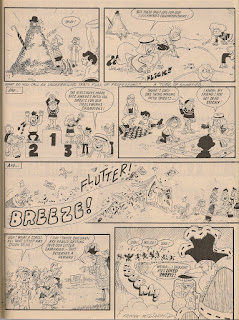 Yes, it's the 'orrible occupant of a notoriously niffy nappy, Sweeny Toddler, carrying out his second raid on our middle-eastern mate. Sweeny's previous intrusion upon Mustapha was during the belligerent baby's multi-raid rampage way back in Whizzer and Chips dated 23 November 1985.

I suspect the billboard advertising Gungeo Hair Gel is another popular music reference, although much more recent for readers in 1989 than that cited above - Kylie Minogue and Jason Donovan had enjoyed chart success with 'Especially for You' in 1988. I'm not going to embed a video of the song, so please seek it out yourself if you're so inclined.