Just 2 weeks after he was the victim of yet another raid by Joker, Mustapha was again unwitting host to an impertinent intruder. Can you locate the Whizz-kid who slipped into this story? Scroll down to learn the identity of the infuriating infiltrator. 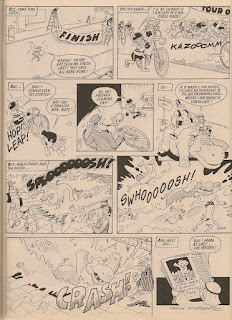 This fame-craving version of Mustapha, who is willing to expend large sums of cash in pursuit of self-aggrandisement, is considerably different from the generous, kindly young lad readers got to know back in his Cheeky Weekly days. The repeated wheel clamping also portrays our middle eastern mate as an inconsiderate road user since presumably he instructs his chauffeur where to park. The 'royal persons' appearing in the strip are of course Prince Andrew and his wife of the time, Sarah Ferguson. Eddie the Eejit is a spoof of Michael Edwards.

It's always good to see Mustapha's pet hippo, Frisky, who made occasional appearances over the years after being introduced in Cheeky Weekly dated 24 March 1979.