During the period covered so far in this series of Whizzer and Chips – The Cheeky Raids posts, every week a character from Chips infiltrated Whizzer and a member of the Whizzer cast gate-crashed Chips (although long-time followers of this blog will know that I only report on those raids which involved characters who appeared in Cheeky Weekly). For the benefit of those less-than-eagle-eyed Whizz-kids or Chip-ites who were unable to locate the sneaky interlopers, the identities of the clandestine intruders were revealed each week in the following issue.

However, it appears that the Whizzer and Chips editor’s apparent concerns over the unexpected consequences resulting from the rivalry he had engendered among readers, which emerged in May 1988, resulted in a moratorium on raids as of Whizzer and Chips dated 30 July 1988, because commencing with the 06 August 1988 issue raiders ceased to be identified. Now, this poses something of a problem for me, since sometimes the cunningly-concealed uninvited guests can be difficult to spot. When I encountered such a situation while researching this series up to this point I was able to refer to the next issue to discover who had been raided by whom. Nevertheless I have done my best to scour the issues from 30 July 1988 (in which the previous week’s raiders were revealed but no raids on that week’s content were in evidence) onwards for raiders, and it seems that for a period there was a halt to ’new’ raids. I believe a few raids did appear during what we might call The Great Whizzer and Chips Truce, but it seems that they only featured in reprinted strips which included a raider on their first outing. In fact there was such an occurrence in that same 06 August 1988 first-to-include-no-raider-report issue, when the reprinted Lazy Bones strip included a raid by an old character, Brave Dave.

Here is that reprinted Lazy Bones strip from the 06 August 1988 issue. The strip had originally appeared in Whizzer and Chips dated 19 November 1983.

Brave Dave first appeared in Whizzer and Chips dated 16 July 1983. Since he's a little-remembered character (certainly not as famous as Odd-Ball or Joker, for example), here's his strip from that same 19 November 1983 edition.

There are 2 further reprinted raids that I have identified during the period of the Truce – the next being a further intrusion upon Lazy Bones, this time by JR in the 13 August 1988 comic. I'm assuming that this is another reprinted raid - I must admit I haven't tried tracking down the original. UPDATE 05 December 2019 - My thanks to Stephen Archer who has tracked down the original appearance of JR raiding Lazy Bones to Whizzer and Chips dated 21 April 1984.

However, the third reprinted raid is more relevant to this blog, since the incursion is undertaken by none other than our toothy pal. This Store Wars story originally appeared in Whizzer and Chips dated 25 August 1984, and was reprinted during the Truce, in the 05 August 1989 edition. 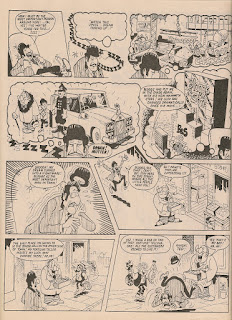 I have done my best to identify any intrusions during this period, but can't guarantee that the odd sneaky one didn't bypass my raider radar.

The moratorium on new raids was eventually lifted, so there'll be more raiding fun soon!