Normally I ask you to spot the raider, then reveal the interloper's identity further down the page, but in the face of this massive onslaught by the teeny terror I felt I should prepare readers for the traumatic events that occurred in the pages of Chips dated 23 November 1985...


This tale of questionable morality (since Calc knew in advance that the bull would escape, why didn't he get Charlie to alert the farmer, instead of waiting for the beast to rampage and then instructing young master Counter to steal the fish?) first appeared in colour in Cheeky Weekly dated 22 July 1978. 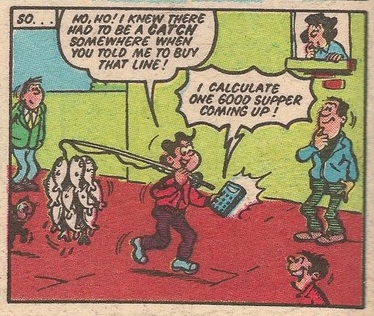 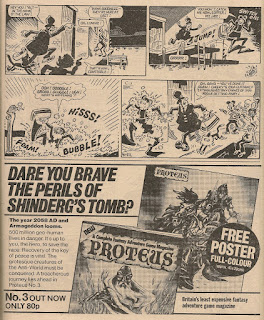 The final ex-Cheeky Weekly star to be raided in this W&C issue is Mustapha... 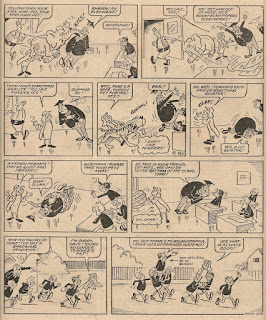 This MM story originally appeared in Cheeky Weekly dated 02 June 1979. On its original appearance, teacher's word balloon in the final panel on the first page made reference to a 'Cheeky Annual'.

Despite Cheeky Weekly having come to an end in February 1980, Cheeky Annuals continued to be published for some years (each edition cover dated, as was the tradition with all Fleetway annuals, a year in advance). The final Cheeky Annual was dated 1985, so sadly the toothy funster's yearly treat was not among the annuals filling the newsagents' shelves when Whizzer and Chips dated 23 November 1985 went on sale.

The tally of raids now stands at Whizz-kids 12, with 6 raids carried out by ex-Cheeky Weekly characters.

In case anyone's wondering, in addition to his raids on the three surviving characters from Cheeky Weekly, Sweeny's fourth raid in the issue in question was on Lolly Pop.

I have a confession to make - I prepared the scans for this post some months ago. When I came to write the post I realised I had forgotten to scan the second page of Mustapha's story above. I didn't feel like embarking on a major excavation to retrieve the Whizzer and Chips in question, so the second page shown above is actually from the story's original appearance in Cheeky Weekly - the eagle-eyed among you may have spotted the 'CHEEKY 2.6.79' in the bottom right corner.