Cheeky is joined on the cover by Welsh wit Taff the Laff for rugby repartee. Over the page, Cheeky’s first gag while on his Sunday paper round (although we don’t actually witness him making any paper deliveries this week) is with Milkie, making his final Cheeky Weekly appearance. I don’t think milk was delivered on a Sunday in those days but I may be wrong.


Paddywack continues to cause consternation thanks to readers’ jokes. I particularly like Jack Clayton’s background gags in the restaurant.


There’s a rare turn from cravat-sporting ‘Showbiz Teacher’ in this week’s Stage School.

Page 11 includes an ad encouraging readers to place a regular order for Cheeky Weekly, a bit surprising since we now know the comic would survive for only 3 more weeks. I’ve always wondered what happened to regular orders when a comic was merged – would the merged title, in this case Whoopee and Cheeky, automatically be substituted by the newsagent unless the customer specified otherwise? Obviously not in those cases where lucky readers were already receiving the absorbing comic in a multi-comic order.
Farmer Giles harvests a crop of corn in this week’s Cut-Out Comedy Catalogue.

6 Million Dollar Gran is evidently undergoing some sort of memory-circuit malfunction during this week’s snowy episode, as she is under the impression that she existed in 1906, when she was actually built in 1977. 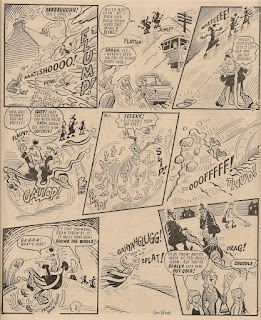 The synthetic senior citizen is not the only one feeling the cold, as on the Chit-Chat page our toothy pal keeps us up to date with the seasonal sartorial choices of the production team. Meanwhile reader Douglas Bell notifies us that our favourite comic appeared in a recent edition of telly ‘tec series Shoestring. 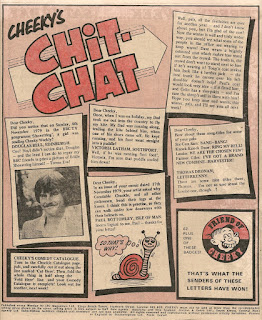 I wonder if there was a bit of a mix-up in the Cheeky office while the staff were comparing winter outfits, as on page 30 Cheeky seems to be introducing this week’s issue. Did someone forget that Cheeky's Week commences on Sunday, not Saturday?


The back cover is again home to Snail of The Century, bringing the comic to another garden gagfest conclusion.

Mike Lacey provides all the Cheeky's Week artwork this time round, and this is the final time he will draw Sunday, Monday, Tuesday and Wednesday. Frank McDiarmid furnishes the front and back covers. Vic Neill does the final of his four stand-ins for Robert Nixon on Elephant on the Run.