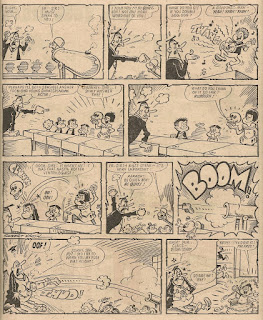 Making its debut in Cheeky Weekly number 87 (the 'New Look' issue), Stage School brought a new twist to that staple of British comics, the eternal battle between schoolkids and their teacher. The spin in this case was that the pupils all aspired to careers in show-business and would thus rather be spending time in the Stage School located across the playground from the 'real class' in which most of the stories took place. Real lessons were taught by a typically bad-tempered teacher wearing the traditional robe and mortarboard, who detested all matters relating to entertainment. The kids' showbiz teacher appeared only occasionally but, in contrast to the real teacher, was a cheery sort who sported a cravat, an item of neckwear which was a late 1970s shortcut to denote 'arty' types – see also Are You Being Served?, The Dick Emery Show, The Two Ronnies etc.

Each of the kids focused on a particular branch of showbusiness. The class included, among others, a mini-magician, a ballerina, Jo-Jo the trainee clown, Merla the mindreader and a junior ventriloquist. The kids employed their own peculiar talents and skills to disrupt the progress of lessons in real class. Perhaps the most memorable student was incompetent escapologist Houdanny (cf Erich Weisz aka Harry Houdini), who spent most strips failing to emerge from a sack wrapped in chains and padlocks.

A panel in the strip dated 19 January 1980, in which Sir drives the kids out of town then dumps them, leaving them to make their own way back to school (his idea of an initiative test), shows our heroes travelling back on a bus going to Kensal Rise, an area of north London, suggesting that the educational establishment is situated somewhere in that area. The Kensal Green/Rise area is now, rather appropriately, home to a number of celebrities but in the late 1970s was considerably less salubrious than of late. 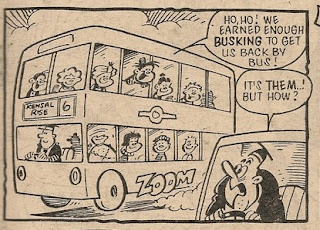 Stage School was absent from just 5 of the issues published after its commencement, notching up appearances in 26 issues, including the final edition of the toothy funster's comic dated 02 February 1980. All but 3 episodes were drawn by Robert Nixon, with Barry Glennard deputising in Mr Nixon's absence. 22 stories were 2-pagers, the remainder concluding within a single page. A single SS strip was in colour, the rest being in black and white. 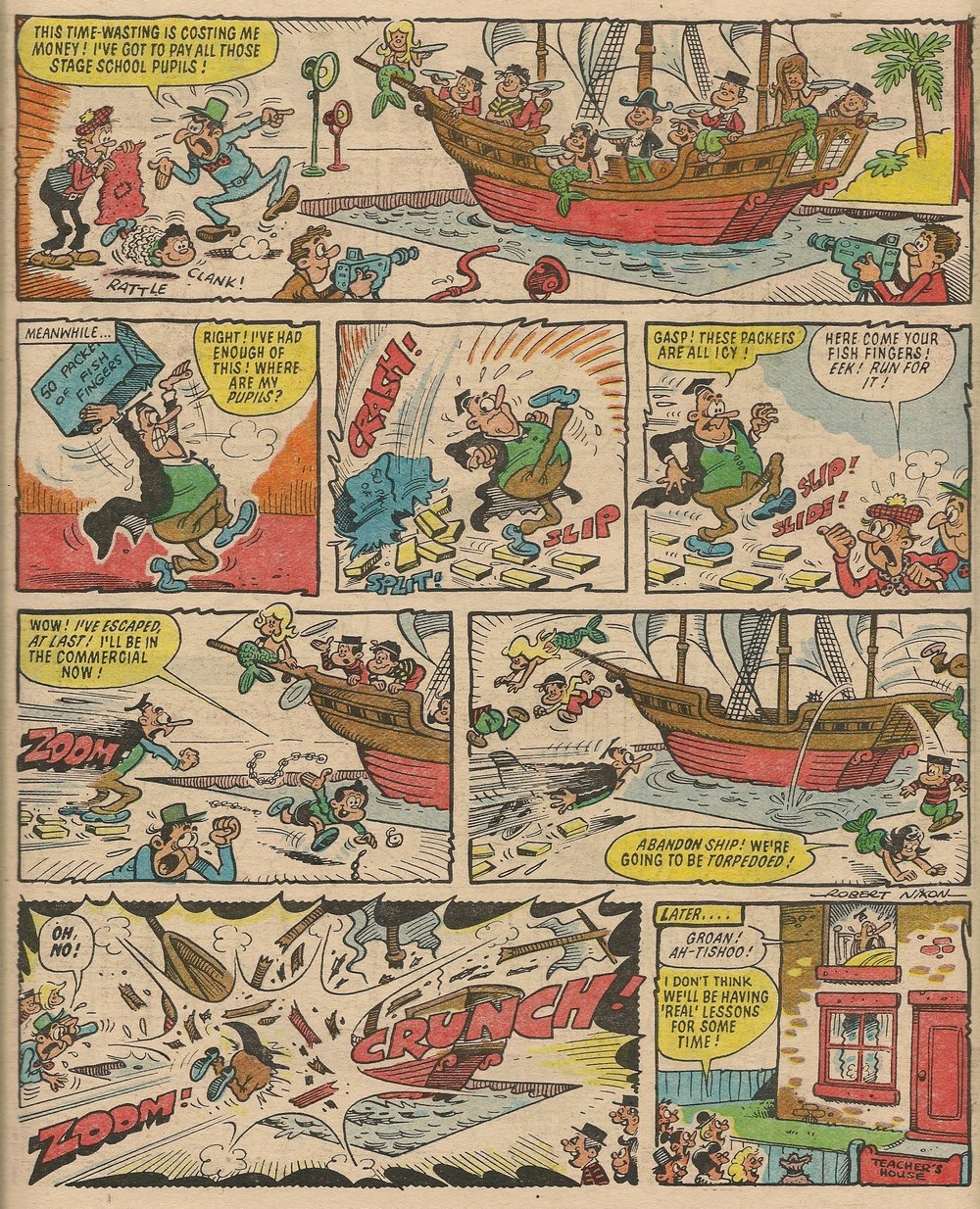 The feature's original title panel depicted a stage with spotlight shining on Teacher as he retracted the sleeve of his cane-wielding arm, the more easily to apply a thrashing to a perspiring pupil's posterior. This somewhat discomfiting tableau was replaced as of the 24 November 1979 issue by a panel simply displaying the strip's title surrounded by stars. This revised intro frame design (with its customary snow-bedecked variant in the Christmas 1979 issue) continued to appear until the end of the Cheeky Weekly run.

The showbiz shenanigans extended to the Cheeky Weekly Holiday Special 1980 and the 1981 Summer Special, each of which contained a single, 2-page Stage School story drawn by Barry Glennard. Teacher and his theatrically-inclined students also appeared in the Cheeky Annuals cover-dated 1981 (1 story, drawn by Barry Glennard), 1982 (1 story, Robert Nixon), 1983 (1 story, Jim Watson), 1984 (1 story, Barry Glennard) and 1985 (three 3-page instalments of a story drawn by Doug Jensen). In the same Annual we also witness Cheeky reading a Stage School tale, which sets our toothy pal cogitating on a possible career for himself in the footlights.

Our mini showbiz chums' tyrannical teacher (never named in the stories) was among the characters who met their future Whoopee colleagues as the merge with that title was announced in the final issue of the toothy funster's comic. 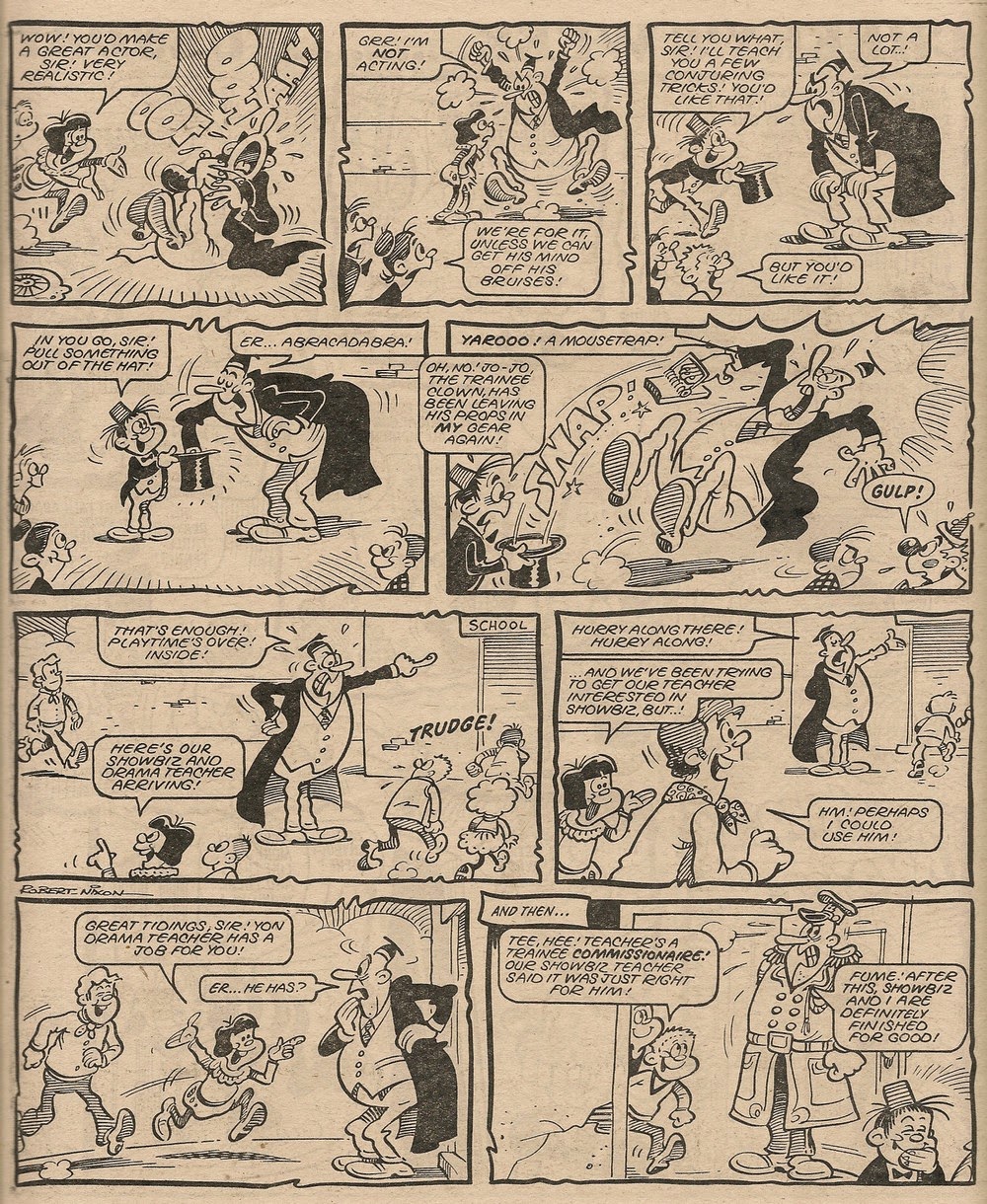 The strip then became a permanent fixture in Whoopee until that title was itself cancelled and merged into Whizzer and Chips as of April 1985. This commendable 5-year run in Whoopee had seen the characters referred to in Cheeky Weekly as Olga and Shakespearian Sam rechristened Margot and Hammy respectively. The character who would be known as Marvo in Whoopee was referred to as Tony in Cheeky Weekly dated 13 October 1979., while Merla the Mind-Reader became Gypsy Rosie in Whoopee. Strongo and Jo-Jo the clown both underwent character redesigns following their move to Whoopee.

The school's headmaster, who appeared only once in Cheeky Weekly, became a semi-regular character during the strip's Whoopee run.

A nice fun feature benefiting from Robert Nixon's lively artwork, Stage School was among Cheeky Weekly's highlights and its extended Whoopee run made it the second longest surviving strip to have emerged from the Cheeky stable.

Over the years I'd come to assume that this strip was inspired by the movie Fame, but it seems the film premiered some months after the strip made its debut.