A number of the supporting cast who populated Cheeky's Week in his own comic originated in the Cheeky pages in Krazy. However not all the characters who appeared in the toothy funster's Krazy strip made the transition into Cheeky Weekly. The character examined in this Rejects post differs somewhat from those featured previously in this series as he was not entirely rejected, but rather repurposed, as we will see...

Imagine a nightmare version of Krazy Town where (now steel yourselves for this) luscious Lily Pop is not the school crossing attendant. Unthinkable, yet there was a time when this was the case. 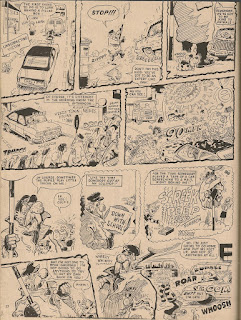 Dan Dan made no further Lollipop Man appearances in Krazy, as (fortunately for Lily Pop’s many fans, including the motorists of Krazy Town) it seems he embarked on a new career before returning in Krazy dated 04 June 1977 in a role which was to transfer into the spin-off and become a Cheeky Weekly regular, that of school gardener Dan-Dan the Lavender Man.