This post updated 26 June 2020 to include examination of poll results dated 20 June 1981 and strike through incorrect reference to the date of Ivor Swap's demise.

The first solicitation for readers to submit votes for their top ten features following the Cheeky Weekly merge appeared in the fourth combined issue to be published, dated 01 March 1980. The cut-out coupon, which was printed within the Cheeky Section, was accompanied by images of 3 ex-Cheeky Weekly stars - the toothy funster himself plus Mustapha Million and Calculator Kid along with, in the interests of balance, a similar number of Whoopee stalwarts – Sweeny Toddler, Pa Bumpkin and Lolly Pop. Any nerves these six characters were feeling as they anticipated the poll results with trepidation were not evident, as all were depicted smiling confidently. 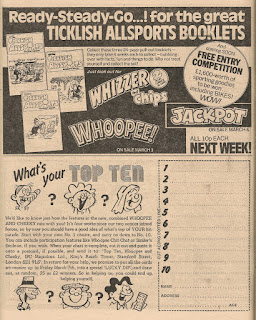 The following week a coupon presenting readers with a less-structured and not-as-capacious voting choice, but giving them the opportunity to identify their least-liked feature, was printed on the Whoopee Chit-Chat letters page… 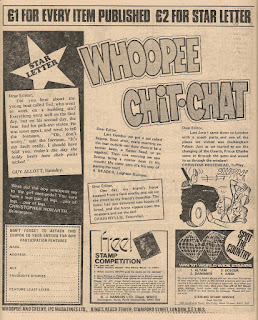 ...and this small coupon appeared on most of the Whoopee letters pages until the final Whoopee Chit-Chat in the 24 April 1982 edition. A new letters page entitled Whoopee Winners then commenced, but no further small coupons were included.


Returning to the much-anticipated (not least by the creative teams generating the strips, whose livelihoods depended on positive reader feedback regarding their efforts) results of the first Top Ten Poll, the relative popularity of the comic's contents, at least in the combined opinions of those who had responded, were revealed in the 10 May 1980 edition, along with the names of the 25 lucky readers whose votes had been drawn from the editor’s battered trilby, qualifying them for a £2 prize drawn from, possibly, the editor's battered wallet. Sadly, there was no mention of the number of votes cast, but our Cheeky chums did rather well, with Mustapha occupying the number 1 spot, Calculator Kid at number 4, $6,000,000 Gran in 7th place and Stage School coming in at number 8. The Cheekmeister himself didn’t feature in the top ten (clearly readers had not been swayed in their choices by the presence of his tooth-packed countenance on the original voting coupon), nor did Paddywack. The absence of Cheeky from the results must have concerned the editor, since our toothy pal was occupying 5 pages of the comic each week at the time.

The next Top Ten voting coupon was published in the edition dated 26 July 1980, appearing within the Cheeky Section for the second and final time. Let's examine the changes that had occurred in the comic since the merge up to the date of the new voting coupon, to get an idea of the contents on which the votes were based.

What strips had start dates spanning the second issue of the combined Whoopee! and Cheeky and its 26 July 1980 edition?


I know - the comic historians among you will be screaming 'Blabbermouth didn't start in the 16 February 1980 edition - he had been appearing in Whoopee! before the Cheeky merge', and you are of course correct (the same applies to Ivor Swap, Sheerluck and Son, Claws VS Caws and Dads As Lads). However, I've included them here partly because, from the point of view of former Cheeky Weekly readers who had decided to follow their fun-pals into Whoopee! and Cheeky, but with no knowledge of the pre-merge Whoopee!, they were new strips, but also because my Whoopee collection begins with the first Cheeky-merged issue, so there's no data in my database for the comic prior to the 09 February 1980 edition! All the strips mentioned in this paragraph appeared, following the Cheeky merge, under the banner of 'Merry-Go-Round', the editor's way of trying to placate any long-term Whoopee readers who were fans of those strips, as the M-G-R feature rotated them on a weekly basis rather than dropping them entirely. Quite regularly 2 features under the M-G-R banner would appear in a single issue, as was the case with the 01 March 1980 edition which contained both Claws VS Caws and Dads As Lads. The mighty matriarch Supermum was another strip to appear on the M-G-R pages, but she was included in the first combined Whoopee! and Cheeky dated 09 February 1980 thus her start date falls outside the window that is the focus of the above table.

OK, so having got that explanation out of the way, we can see that in the period between the first and second Top Ten voting coupons, 5 existing strips that were new to former Cheeky Weekly readers had appeared, as had Cheeky's new vehicle, What a Cheek, and the untitled new feature concerning the back yard escapades of the toothy funster's mollusc mate, Snail. Cheeky himself had a new vehicle, the film spoofery which began as Cheeky Film Productions then a week later became Cheeky Movie Masterpiece. The less-than-scintillating C**p had also taken up unwelcome (in my view) residence in the Cheeky Section.

So now let's identify the features which finished between the second issue of the combined Whoopee! and Cheeky and its 26 July 1980 edition...


...so all the strips that came to a conclusion in the period in question were the toothy funster's. It's Cheeky retired after just 5 issues, but my theory is that its function was to introduce the toothy funster and his Krazy Town pals so that readers previously unfamiliar with the characters had a chance to see them in their 'natural' state before the movie spoofs began. I'm assuming of course that the introduction of the spoofs was planned before Cheeky Weekly was merged into Whoopee! Bungles in the Jungle inside was the announcement of the first movie-related strip on the cover of the Cheeky Section, and only appeared once. Although B-in-the-J was the title of the toothy funster's first film outing, it was the sub-heading under the strip's main title of Cheeky Film Productions. However the following week the main title changed to Cheeky Movie Masterpiece (which is shown in the table of starters above since it was still running as of 26 July 1980). Our grinning hero also had a one-off Easter strip with the rather prosaic title of Cheeky's Easter.

For a complete view of the newly-amalgamated comic's contents, let's look at the continuing strips in the period (i.e. those whose start dates were earlier than 16 Feb 1980 and end dates were later than 26 July 1980 (start dates are shown as 09 February 1980 for the reasons explained above, and please note that Cover Feature is how I identify anything that appears on a cover that is not a strip, e.g. the announcement of a competition or free gift, or promotion of the contents of the issue)...


So the above line-up, plus those listed in the table of 'starters' above, was what readers would be voting on when they sent in their completed coupons from the 26 July 1980 comic. Some readers, nostalgic for the days prior to the recent merge (long-time Whoopee! fans who objected to the influx of Cheeky-related material, as well as fans of the toothy funster still mourning the demise of his title), may of course have voted for strips that finished some time earlier, hoping they would be reinstated.

The next poll results to be published appeared in the edition dated 15 November 1980...


Mustapha maintains first position, Calculator Kid moves up from 4th to 2nd place, Stage School is up from number 8 to number 6. $6,000,000 Gran drops off the list entirely, having been at number 7 last time. Once again the page-hogging Cheeky fails to make the grade, as does Paddywack, which is rather odd since the bumbling buffoon was promoted to a run as Whoopee's front cover strip in the week before these latest poll results were printed.

Readers of the time clearly didn't share my distaste for C**p, since the irksome infiltrator into the Cheeky Section was ranked at number 10.

The next Top Ten Results were presented in the issue dated 20 June 1981 (5 weeks before the final issue of the Whoopee! and Cheeky era), although no Top Ten vote coupons had appeared in the intervening period. We have to assume that this set of results was compiled from the small, 'favourite/least liked' coupons appearing regularly on the Chit-Chat pages.

Once again, we'll look at the changes introduced to the comic between the 26 July 1980 edition (the cutoff date for the tables above) and that dated 20 June 1981. These are the features that started in the period...


The Cheeky strip commenced (replacing his Movie Masterpieces, but maintaining a 4-pages-per-week footprint). The hypnotic humorous hi-jinks of Mike Lacey's Blinketty Blink were new, but Pest of the West was a reprint from Wham! Jim Petrie's tales of the nutty neolithic neighbours The Cavers is a favourite of mine. $6,000,000 Gran had undergone a fairly major revamp to become Robot Granny, the changes possibly being introduced as a result of Gran having fallen off the top ten in the previous poll.


I've excluded a number of one-off competitions and puzzles from the above list.

As mentioned above, Movie Masterpieces had ended and the Robot Granny strip had replaced $6,000,000 Gran. Snail's untitled strip had also finished. Whoopee! stalwart and timorous twit Scared-Stiff Sam had come to an end. Merry-Go Round participants Ivor Swap and Dads as Lads enjoyed their final reminiscence in the issue in which these results appeared, but clearly readers hadn't appreciated the editor's attempt to sustain them by means of the M-G-R strategy.

What's not reflected in the tables above is the dropping of the concept of the centre pages being a Cheeky Comic within Whoopee, a conceit which came to an end in the 04 October 1980 issue, meaning the What a Cheek feature, which had functioned as the cover strip to the Cheeky Comic, was dropped as of that same week along with its accompanying untitled Snail feature.

My guess is that tying all the contents of the centre pages to a character who clearly wasn't as popular as the editor had hoped was deemed to be a bad idea.

Below is a list of the ongoing strips at the time. 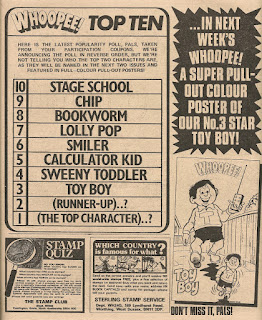 The format of the 20 June 1981 results was a little different, as the wily editor chose to delay the announcement of the two most popular features, informing readers that the holders of the top 3 places would be honoured with centre-page posters in forthcoming issues. As revealed by Irmantas, the second-placed feature was the Bumpkin Billionaires, while number one position was retained by Mustapha Million. Calculator Kid had fallen from number 2 to 5th place, and Stage School just scraped into the list in 10th place, having been at number 6 in the previous poll. Clearly the abandonment of Cheeky's Movie Masterpieces in favour of the Cheeky strip, which was a return to the more familiar Cheeky fare of his heyday, hadn't proved popular as the toothy funster still failed to enter the top ten. Gran's transition to Robot Granny also failed to return the character to her former position among the most popular strips. Paddywack was again absent from the top ten, and is probably the reason that the following issue would be the last to feature him as the front cover strip.

My examination of the fortunes of the ex-Cheeky Weekly funny folk in Top Ten polls continues here.
Posted by Niblet at 18:31