Cheeky bounds boldly into the new decade, despite  there being an indication inside our favourite comic that it will not survive very long into the 80s. Nevertheless, Cheeky and pals are putting on a buoyant display for the cover, although Jogging Jeremy (the subject of this issue's Comedy Catalogue) can’t even match the athleticism of Snail.


New Year’s Day 1980 is on a Tuesday, so Cheeky’s Sunday is set 48 hours before the commencement of the leap year, and includes the farewell appearance of Sid the Street-Sweeper.


Charlie Counter, lacking funds as is often the case, is unable to watch the New Year match (the ‘wanting to get into football ground’ scenario being a stock comic plot). Thanks to Calc’s plan involving footballs stuck in a tree, Charlie ends the strip enjoying the match from the comfort of the Director’s box.

Elephant and The Man in the Plastic Mac are considering their respective and contradictory new year resolutions, but by the end of the story both have abandoned their plans and the status remains very much quo.

We’re treated to a 2-page Monday, which commences with the Cheeky clan gathered around the clock chiming midnight, so strictly speaking it’s Tuesday. Regular Hogmanay reveller Uncle Hamish (see the new year festivities of 1978 and 1979) is in attendance, and can any party be a success without the presence of luscious Lily Pop?

On the (proper) Tuesday page a post-party toothy funster is out and about.

The Soggy the Sea Monster reprint finds the likeable leviathan encountering a party on a yacht, but whether the story was originally written with a new year theme, or the ‘Happy New Year’ in the final panel was added specifically for its reuse here, remains unclear.

Mustapha is contemplating the new year. His pals are concerned when they see him bulldozing the playground, but are relieved when they learn his plan is to replace everything with brand new equipment – part of his scheme to change things for the new decade (although he sticks with a traditional slap-up feed conclusion).

The Gang attend a new year fancy dress party in their reprint adventure.

Travelling north of the border to enjoy Hogmanay, 6 Million Dollar Gran and the Potts family meet another of their Caledonian relatives, Uncle Hector, (we’d previously met their Uncle Hamish McPotts – not to be confused with Cheeky’s uncle – in the 28 October 1978 edition). To complicate things further, Gran meets yet another Hamish, claiming him to be a cousin (presumably of the Potts rather than her own, since she's a robot), at the conclusion of this week’s tale. 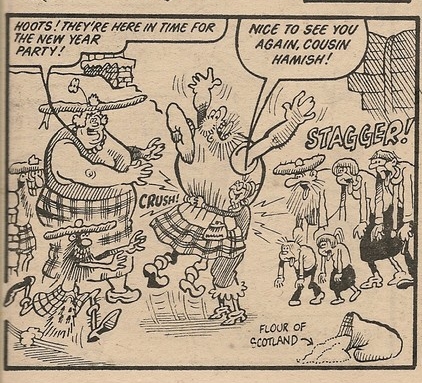 On the Chit-Chat page, Cheeky’s cryptic reference to exciting things to come, and the absence of the solicitation for readers' contributions that has appeared on all previous outings of this feature, suggests that the comic may have a limited future. 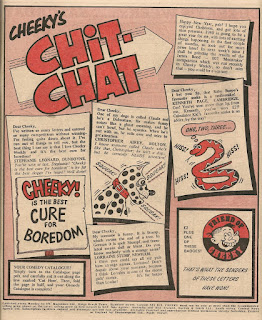 The toothy funster’s Saturday amble around Krazy Town allows him to quiz his pals on the progress of their new year resolutions, before Cheeky's slithering sidekick leaves his grinning companion indoors struggling to write his own resolutions, and heads into the back garden for another Snail of the Century.

Making their final Cheeky’s Week appearences this issue (along with Sid the Street Sweeper) are Herman, Goalie Cat, Gunga Jim, and Willie Brushiton.

A pleasingly all-Frank McDiarmid Cheeky's Week issue gets the year off to a promising start.