As I near the end of my examination of Cheeky Weekly, I am now preparing for the next phase of this blog, which will be following the fortunes of that select band of strips that transferred into Whoopee following the cancellation of  Cheeky's comic.

You're probably aware that I built a database to record all the Cheeky Weekly data, and I use this to do various analyses about the comic. The database idea developed from my decision about nine years ago to scan all my issues of Cheeky Weekly as a kind of backup to the physical copies should anything happen to them. I began the Cheeky scanning process on 30 November 2009, with the aim of completing 2 issues per day, and finished on 07 March 2010. This process encompassed all 117 issues of the weekly comic (the summer/holiday specials being scanned between 13 and 22 August 2010), but not the annuals as I didn't want to damage them.

As I scanned each image I included in the filename the contents of that particular page, and the artist information. As I looked at the growing 'Cheeky Scans' folder on my laptop, I realised all that data could be mined and yield some interesting (to me, anyway) information, such as the number of strips drawn by a particular artist. I therefore developed a structured way of recording in the file name all the various nuggets of info about each page.

Initially my intention was to search through the filenames using Windows File Explorer to satisfy my curiosity about the comic's history, but I soon encountered the limitations of this approach. A further idea then emerged which was to design and build a database to accommodate the information, allowing much deeper analysis of the data. So I built the database then created some procedures that would read through all the filenames in the Cheeky Scans folder and distribute the data into the various database tables.

The Cheeky Weekly data was loaded, some more procedures written to do the analysis and generate the tables that you will be only too familiar with on this blog, and I tentatively entered the blogosphere with this humble offering on 26 June 2010.

But that wasn't the end of the scanning - 06 December 2013 saw me hunched once again over a steaming scanner and commencing to work through my Whoopee collection, which commences from the first Whoopee/Cheeky merged edition. This scanning project was more onerous than the Cheeky one, as there were 264 editions of Whoopee between its absorption of the toothy funster's comic and its own demise. The Whoopee scans were completed on 24 July 2015, and as I write this I realise I didn't scan the Whoopee specials, and I'm not even sure if I have them in my collection - will have to investigate.

In recent weeks my preparations for the Whoopee phase of this blog have involved doing some loads of the Whoopee data into a test instance of my comics database. I encountered some errors resulting from typos in the data (not surprising when you consider that the data relates to 8,462 Whoopee pages) which have now been corrected, but I'm pleased to say that my code for doing the data loads was found to be entirely bulletproof.

Now that figure of 8,462 Whoopee pages brings me to the real subject of this post. The mathematicians among you will of course be shouting 'Whoopee was a 32 page comic, and 8462/32 = 264.4375, so explain yourself at once, Mr Niblet'.  And indeed I was also puzzled as to how .4375 of a Whoopee could exist. Had I, in a frenzy of scanning, somehow entered duplicates of some pages? A quick delve into the data revealed that there were in the period in question 4 issues of Whoopee which exceeded the normal 32 pages;

The first was 25 August 1984's 36-pager, which contained a 4-page flyer (or 'Extra 4-Page Pull-Out' as it styled itself) in its centre pages for football mag Shoot! which was evidently getting a big promotional push for the 1984/85 season. 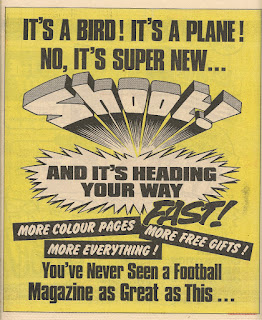 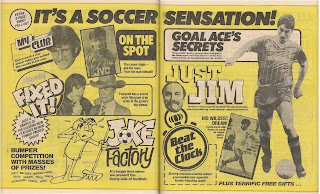 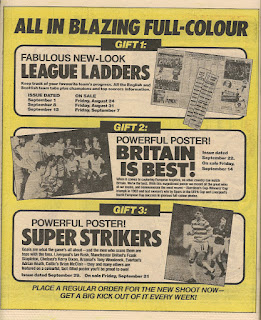 The next 32+ issue was the same year's 15 September edition which contained a new version of the flyer, still describing itself as an extra 4-page pull-out, which was a little fraudulent as the comic that week amounted to 34 pages and thus readers were actually 2 pages down on the deal. 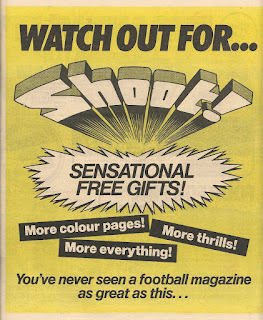 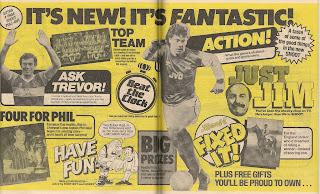 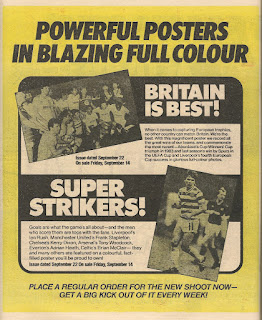 The next issue to exceed 32 pages was 29 September 1984, which contained a 4-page flyer among its 36 pages, the design cheekily referencing The Sun newspaper. 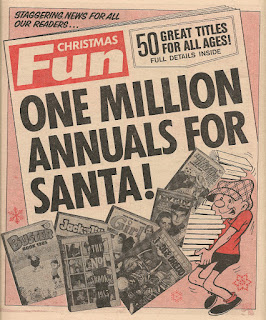 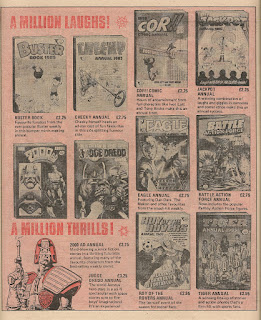 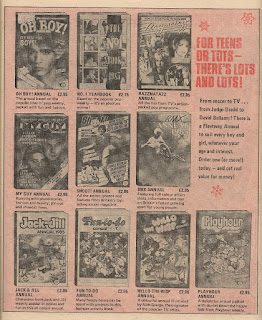 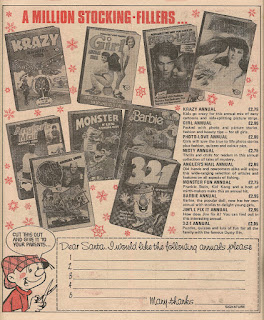 You brainy readers will have calculated that the supposed 50 titles (although the first page of the flyer promises full details of 50 titles, only 30 are detailed - 29 pictured plus mention of David Bellamy who may have had an annual devoted to him although Wikipedia doesn't mention it in his bibliography) and million annuals equates to 20,000 of each, but maybe IPC weighted their print runs towards those they expected to be popular so, for example, there may have been fewer 321 Annuals than Buster (I know which I'd rather read, and the less said about the Jim'll Fix It annual the better). And why no mention of the mighty Whizzer and Chips and, for that matter, Whoopee? Pleasing, though, to see the Cheeky Annual listed second, after IPC's humour heavyweight, Buster.

Whoopee's final 36-page issue was that dated 20 October 1984, which contained a 4-page flyer for IPC's computer mag, Big K. Wikipedia tells us that the mag launched in April 1984 and survived for only a year (maybe not surprising for a publication whose name sounds more like a breakfast cereal than a hip guide to the latest tech). 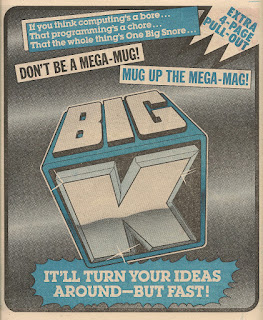 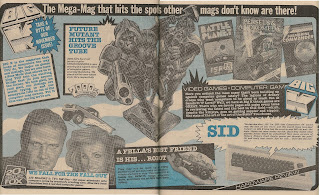 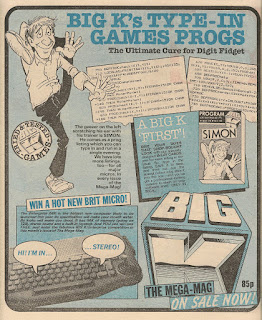