Gunga Jim and Vicar join our toothy pal on this week's cover for a spot of bridal banter, not to mention marital mirth. The third instalment (of four) of the Giant Cheeky poster occupies the centre pages this week, but there's no mention of it on the front page, the editor probably judging that no-one who missed the first two sections is likely to come aboard now for the sake of half a poster (even though all they have missed to date is Cheeky's lower regions).

I'm sure you're fed up with my complaints when 6 Million Dollar Gran is described as bionic despite it having been made clear in the first episode that she's a robot, but I'm afraid it's happened again in the banner at the top of the cover (for more about this banner see here). The lower banner promises that the comic will lift the spirits of those of a morose disposition, so let's head inside for some fun.

MikeLacey illustrates Cheeky's traditional Sunday paper round, including an encounter with Olivia Newton-John and John Travolta (singles lifted from the Grease soundtrack and performed by the pair had furnished the second and third most popular singles in the UK charts of 1978), although the dance-based gag suggests the scriptwriter maybe confusing Grease with Saturday Night Fever (the source of the fourth most popular single of '78).

This week Charlie decides to use his own initiative rather than rely on Calculator's advice. Young master Counter's prescient pal indulges this misguided venture, before saving the day with typical electronic aplomb.


Meanwhile, Stage School teacher is rather liberal with the physical chastisement.

In the centre pages is the aforementioned third instalment of the Cheeky poster. Some casual readers may have decided, on the assumption that the final section would feature our mirthful mate's ugly mug, to put off purchasing the comic until part 4 of the poster is published. However, any such money-saving strategies have been foiled as, on our gradual ascent of the toothy funster, we have now reached his chest-to-jaw area. Those putting off the purchase until the final week will find they have only the upper half of Cheeky's face to adorn their bedroom walls.


The Wednesday page is the scene of another final appearance, as we say farewell to Posh Claude's mum.

There's further rear-end roughing-up in Tub's story, where our portly pal is assailed by a malevolent merchant of menswear.


Page 29 is the site of an advert for Whizz Kids, but this is not a plug for the front section of IPC's long-running 2-comics-in-one, it's an ad for a series of instructional paperbacks. 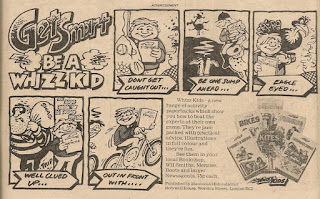 Cheeky is up early on Saturday as he takes on an additional newspaper round, during the course of which he meets avid TV viewer Square-Eyes. Their gag is based on the unlikely premise of breakfast-time TV. As if that will ever happen!

Snail of the Century again brings the comic to a close.