Eight weeks after the humiliating events recorded here, which heroic ex-Cheeky Weekly star embarked on an audacious revenge sortie into the pages of Whizzer? Read the following strip (including a character depiction that would be considered inappropriate today), then scroll down for the answer. 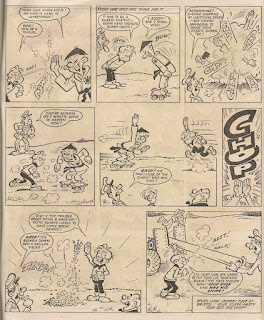 Mustapha first infiltrated Steve's story when he was given the honour of making the inaugural Chip-ite raid of Whizzer and Chips' post-Whoopee-merge era, back in April 1985.

By this stage those wastrel Whizz-kids had mounted 12 raids on ex-Cheeky stars while our plucky pals had penetrated Whizzer on 7 occasions.