1982's 'little alien lost' movie blockbuster, E.T. the Extra-Terrestrial, had its UK premiere on 09 December of that year. In Whoopee! dated 26 February 1983, Cheeky regaled his Krazy Town pals with a barrage of E.T. gags. At the end of the strip, readers were invited to submit their own E.T. suggestions for the chance to win 'E.T. type awards'.


In Whoopee's 09 April 1983 issue, the following announcement appeared, including a version of Cheeky drawn by (presumably) a Whoopee! staff artist. 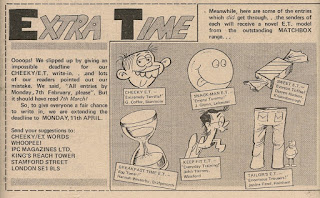 Email ThisBlogThis!Share to TwitterShare to FacebookShare to Pinterest
Labels: The Other Artist's Cheekys, Whoopee