The features - Laugh and Learn

Cheeky's Teacher gained his own puzzle feature, Teacher's Teasers, as from 26 August 1978. Although Teacher's Teasers was a filler that appeared in just 3 issues, it seems that the Cheeky Weekly editor felt the podgy pedadogue deserved elevation to co-star status with the toothy funster himself in a new feature, Laugh and Learn.

Laugh and Learn had a sporadic, 5-issue run between Cheeky Weekly's 07 October 1978 and 09 December 1978 comics. Each episode was set in Cheeky's classroom, where Teacher would focus on a particular area of general knowledge. As Cheeky's tubby tutor attempted to impart salient facts relating to the topic in question, our toothy pal would counter each point with a wily witticism. Only in the 04 November 1978 comic did Cheeky emerge from the lesson punishment-free; in all the other episodes Teacher gave him lines or, on one occasion, an essay to complete. 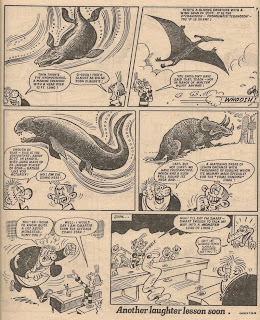 Teacher's lectures commenced with the lesson on prehistoric creatures shown above, and subsequent episodes covered the following topics;
The artwork on the series was unusual for a British humour comic, as each episode was a collaborative effort between Barrie Appleby, who drew the classroom and characters therein in his usual fun, zany style, and Brian Walker who did some very nice work illustrating the topics on which Teacher was expounding. Brian signed his work in all but the first strip, whereas Barrie didn't sign at all. 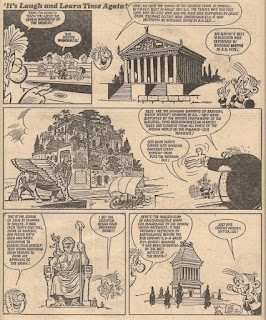 Despite the caption in the final panel of the fifth Laugh and Learn, dated 09 December 1978, reading 'There'll be another feast of fun and facts soon pals!', it was the last episode to appear - see below. Maybe reader feedback indicated that kids found the educational element of the feature uncomfortably similar to actual lessons. 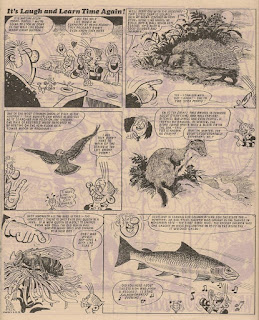 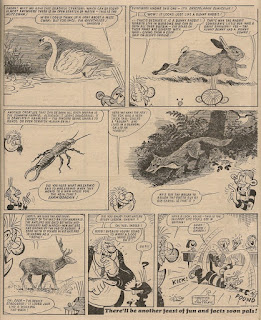 Laugh and Learn in the Cheeky Weekly Index